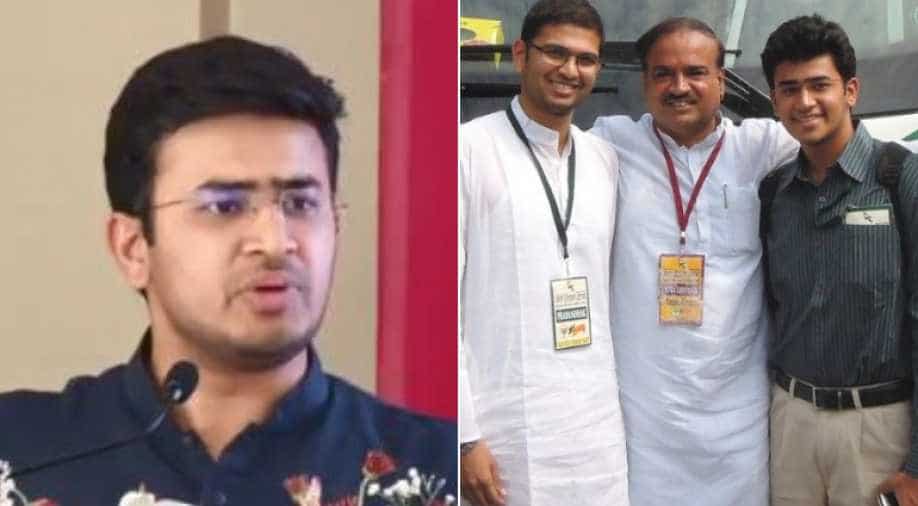 In a surprise move, the BJP Tuesday fielded party's youth wing leader Tejaswi Surya from its bastion of Bangalore South from where the widow of union minister Ananth Kumar, a six-time MP from this prestigious Lok Sabha constituency, was denied the ticket.

Ending the suspense with just hours left for the deadline for filing of nominations for the first phase of polls in Karnataka, the BJP central leadership announced past midnight last night the name of 28-year-old Surya, a lawyer and a member of the party's national social media campaign team.

It was widely expected that the BJP would field Tejaswini given her active participation in scripting her husband's victories from the seat six times, but Surya emerged as the dark horse. Surya filed his nomination papers Tuesday.

Tejaswini was also confident about fighting the poll on BJP ticket and had been preparing for it and had started a door-to-door campaign.

She said the party decision came as a shock to her and all of her supporters but maintained that it is very important to show that the BJP was a party with a difference.

"OMG OMG!!! I can't believe this. PM of world's largest democracy & President of largest political party has reposed faith in a 28 yr old guy to represent them in a constituency as prestigious as B'lore South. This can happen only in my BJP," Surya tweeted, reacting to the announcement.
"Tejaswini Ji has given her blessings".

OMG OMG!!! I can't believe this.
PM of world's largest democracy & President of largest political party have reposed faith in a 28 yr old guy to represent them in a constituency as prestigious as B'lore South. This can happen only in my BJP. Only in #NewIndia of @narendramodi

The reason behind projecting Surya, said BJP sources, was to build a second line of young and talented leaders who can lead the party.

Counted for his oratorical skills, Surya was involved in strengthening the party base in the city as well as in coastal Karnataka, especially around Mangaluru and Udupi, the BJP strongholds.

He will take on Congress Rajya Sabha member B K Hariprasad.

The party apparently plumped for Surya who is from the RSS stable.

Besides being a part of the BJP social media campaign team, he heads the party's state IT cell.

A BJP veteran, Ananth Kumar, who died last year after battling cancer, represented Bangalore South for six terms and had defeated IT czar Nandan Nilekani in the 2014 polls.

"It's Tejaswi and not Tejaswini!" the Twitterati reacted, as the BJP central leadership sprang a surprise for the Bangalore South seat.

Following the denial of ticket to Tejaswini, her loyalists made a bee-line to her house.

A group of her supporters shouted slogans, saying she should have been given the ticket.

Tejaswini, however, insisted that she remained loyal to the party and she accepted their decision to ensure 'NaMo Again'.

"I urge all the BJP karyakartas, friends and well-wishers who are anxious and upset & still visiting our house in large numbers, time to show we are a party with a difference. We are all committed to tread the path of ideology. And work for #NamoAgain2019," she said in a tweet.

Later talking to reporters here, she said there can be some sense of dissatisfaction because things did not happen according to one's beliefs.
"It is but natural. But above all is the decision of the party... I have been telling my party workers, whatever the party has decided will remain binding on me. Nation first, party next and my interests come last," she added.

Tejaswini, an aerospace engineer, runs an NGO Adamya Chetana in memory of her mother-in-law Girija Shastry, a staunch RSS loyalist, who was active in politics as the member of Bharatiya Jan Sangh, the earlier avatar of BJP.
Active in public life through the NGO, Tejaswini had worked as a scientist at Aeronautical Development Agency (ADA) between 1993-1997 and also on the Light Combat Aircraft (LCA - Tejas) project.

During her student days, she was very active in Akhil Bharatiya Vidyarthi Parishad (ABVP) and has also served as its state Joint Secretary and the National executive member.

Bangalore South has eight assembly segments, with BJP holding five and Congress three after the 2018 assembly polls in Karnataka.

True to its cosmopolitan nature, the constituency has a considerable share of Brahmin, Vokkaliga and Muslim voters and a mix of upper and middle-class voters.

The constituency was under the hold of the erstwhile Janata Party after the 1977, 1980 and 1984 general elections and from 1991-2014 in successive parliamentary polls the BJP has maintained its grip, mostly with Ananth Kumar, who first got elected to the Lok Sabha in 1996.