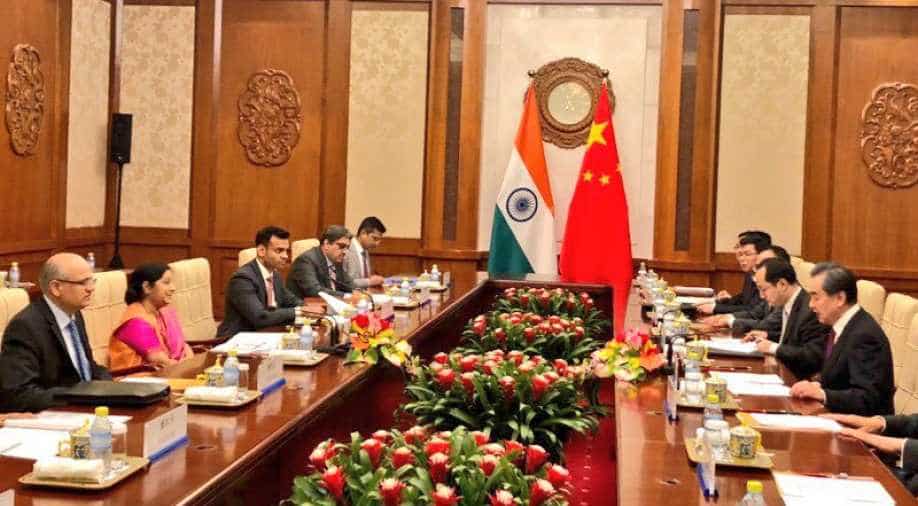 This was the first meeting between the two after Wang was elevated as state councillor last month Photograph:( Twitter )

Prime Minister Modi will be visiting the central Chinese city at the invitation of President Xi, Wang said at a joint media event with visiting External Affairs Minister Sushma Swaraj after their talks.

''We will make sure that the informal summit between the two leaders is a complete success and a milestone in China-India relations,'' he added.

Informed sources that it will be an informal summit meeting between Xi and Modi during which both leaders will try to work out a new paradigm for the bilateral ties bogged down with a host of disputes and differences, PTI reported.

This will be the fourth visit of Modi to China after he came to power in 2014. He is again due to visit China to take part in the SCO summit to be held at Qingdao city on June 9-10.

The Modi-Xi summit meeting is taking place in the backdrop of series of high-level interactions between both the two countries starting with Chinese Foreign Minister Wang's visit to India in December, the first after Dokalam standoff.

We will make sure that the informal summit(between PM Modi and President Jinping on April 27-28) will be a complete success and a milestone in China-India relations: Chinese Foreign Minister Wang Yi pic.twitter.com/w3y3pTr6ML

''As it directly affects lives of people living there we welcome this. Also, Kailash Mansarovar Yatra will resume this year through Nathu La pass, Sushma Swaraj said.

India and China agreed to work together on issues like terrorism, climate change, sustainable development, global healthcare and several others issues, Swaraj said.

Reinforcing the positive momentum in our relationship! EAM @SushmaSwaraj warmly welcomed by Foreign Minister and State Councillor of China Wang Yi at the Diaoyutai State Guest House in Beijing ahead of their bilateral meeting. pic.twitter.com/wooyNLkpIH

Swaraj arrived here on Saturday on a four-day visit to take part in the foreign ministers' meeting of the Shanghai Cooperation Organisation (SCO).

This is the first meeting between the two after Wang was elevated as state councillor last month which makes him the top diplomat of the country in the Chinese hierarchy. He also continues to be foreign minister.

Swaraj congratulated Wang on being elevated as state councillor and appointed the special representative for the India-China boundary talks.

Together we prosper! EAM @SushmaSwaraj and State Councillor and Foreign Minister of China, Wang Yi discussed all aspects of our bilateral relationship to strengthen India-China multifaceted engagement. pic.twitter.com/rALF4WFPYf

Their meeting is part of efforts by the two countries to step up the pace of high-level interactions to improve relations, official sources here told PTI before the meeting.

Following the Dokalam standoff last year both countries increased dialogue to scale down tensions and improve relations with talks at various levels.

Swaraj and Wang are meeting in the immediate backdrop of the recent meeting between National Security Advisor Ajit Doval and top official of the ruling Communist Party of China (CPC) Yang Jiechi in Shanghai.