'Normalcy will only be restored with return of displaced people to Rakhine': Sushma Swaraj 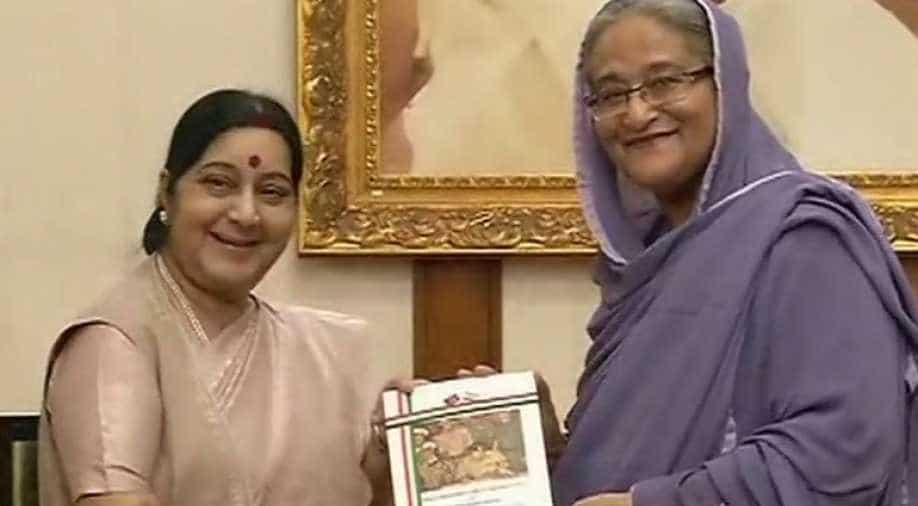 This is Sushma Swaraj's second visit to Bangladesh after 2014. Photograph:( ANI )

Sushma Swaraj discussed the situation arising out of the influx of displacement of the Muslim minority population and the need for an early solution to it.

She also discussed ways to deepen her partnership with the country.

She praised PM Sheikh Hasina's of productive discussions at the Bangladesh-India Joint Consultative Commission (JCC) meeting and also the progress made by her since her visit to India.

EAM Sushma Swaraj apprised PM Sheikh Hasina of productive discussions at the JCC and tangible progress made since her visit to India: MEA pic.twitter.com/LrW55JBOXD

Swaraj met with the prime minister after her meeting with the country's foreign minister AH Mahmood Ali.

In the fourth JCC meeting, she discussed the exodus of Rohingyas in Rakhine, the challenges of terrorism, radicalisation and extremism with her counterpart.

The external affairs minister expressed her concern at the violence against the Rohingyas in Rakhine.

"India is deeply concerned at the spate of violence in the Rakhine State of Myanmar. We have urged that the situation be handled with restraint, keeping in mind the welfare of the population," she said.

On terrorism, the external affairs minister said, "We will continue to fight this scourge together and along with other like-minded countries."

We will continue to fight this scourge together and along with other like minded countries: EAM Sushma Swaraj in Dhaka, Bangladesh

Sushma Swaraj added that she was determined to adopt a zero-tolerance policy against the ideologies of hate, violence, and terror.

She also focused on a comprehensive approach to fighting violent extremism and terrorism.

We are determined to protect our societies from threat of ideologies of hate, violence and terror by adopting a zero tolerance policy: EAM

(cont) and a comprehensive approach in fighting violent extremism and terrorism at all levels: EAM Sushma Swaraj in Dhaka, Bangladesh pic.twitter.com/W6eROF6f2W

She also assured that besides the bilateral relationship she is also working towards resolving outstanding issues.

Sushma Swaraj is on a two-day visit to Bangladesh.

She was earlier welcomed by the Bangladesh foreign minister AH Mahmood Ali and High commissioner of India.

The third JCC meeting was held in New Delhi in 2014.

This is Swaraj's second visit to Bangladesh.Earlier she visited the country in 2014.