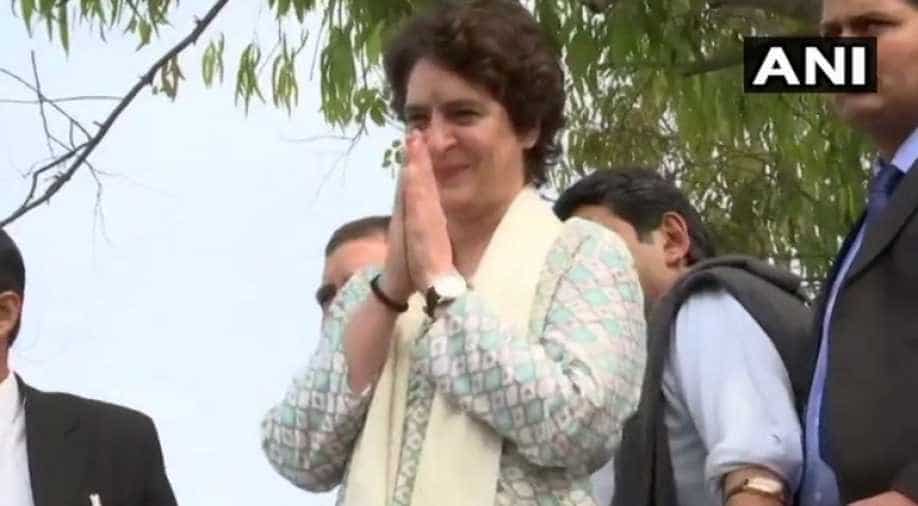 Smriti Irani hit back at Priyanka Gandhi and said, 'I have been an actor and it would be better if Priyanka ji stopped her acting'.

Congress general secretary Priyanka Gandhi Vadra lost her usually collected demeanour and lashed out at "outsider" Smriti Irani stating that the Union Minister had insulted the people of Amethi by distributing shoes there.

"Elections are here and many outsiders have also come here to spread lies that Rahul Gandhi does not visit here. You people know the truth," Priyanka said during an election rally here. "The objectionable thing is that Smriti Irani ji came here and distributed shoes. She thought that she is insulting Rahul ji but she has insulted the people of Amethi. You should teach them that people of Amethi and Rae Bareli respect themselves and will not beg in front of anyone. They should come to you and beg for votes," Priyanka said.

The Congress leader addressing people at a Nukkad Sabha here said "You should understand what is happening in this election, lying, attempting to divert the attention of people and a campaign that is removed from reality. I have been going around Uttar Pradesh East and seeing the suffering of people, small industries have been shut, youth are unemployed, they have stopped development works in Amethi."

#WATCH Union Min Smriti Irani: Call all the relatives you have,be it from India,from Italy or from any part of the world.People of India will do justice&they have already decided to choose Pradhansevak again,but this time whole Gandhi family will also be given a strong message." pic.twitter.com/ocp1H1CSHQ

Speaking in the same vein, Priyanka said, "People of Amethi and Rae Bareli have never begged in front of anyone. Whosoever has come in front of them, have come with respect. My family have realised that people made us. You have given power and love as well. You are the one who make us leaders."

Meanwhile, the actor-turned-politician Smriti Irani hit back at Priyanka Gandhi and said, "I have been an actor and it would be better if Priyanka ji stopped her acting. As far as the plight of those poor people who did not have shoes to wear, if she has even a bit of shame she should go and see for herself what the truth is."

BJP has fielded Smriti Irani against Congress president Rahul Gandhi in Amethi. In 2014, Rahul had defeated Irani by a margin of over one lakh votes.

Priyanka also hit out at Prime Minister Narendra Modi claiming that he has not visited a single village of his constituency.

"Rajiv Gandhi used to visit areas of his constituency. Rahul Gandhi also visits villages. I went to Varanasi, I asked people if the Prime Minister has come there. I learnt that he has not visited a single village in the last five years," she said.

Amethi and Rae Bareli in Uttar Pradesh are scheduled to go to polls in the fourth phase of the Lok Sabha elections on May 6, while Varanasi will witness polling in the last phase on May 19.