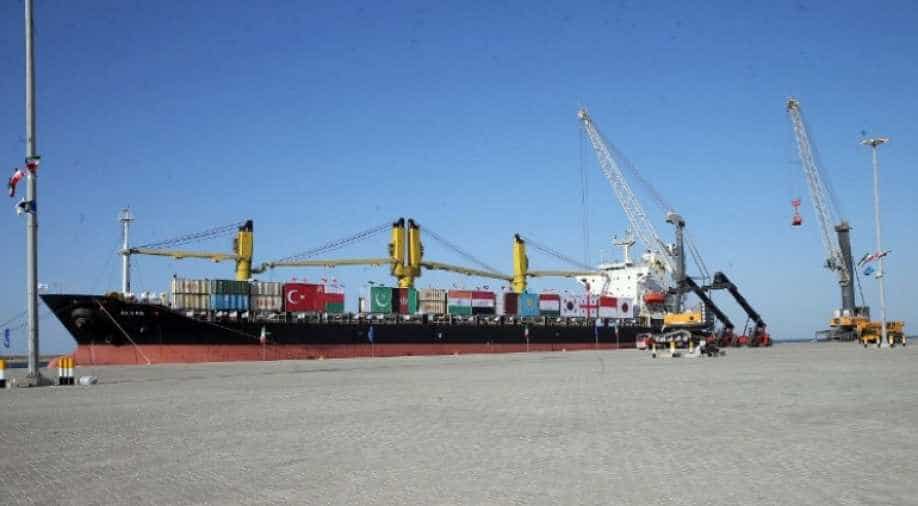 A handout picture provided by the office of Iranian President Hassan Rouhani on December 3, 2017 shows a ship bearing various flags parked at Chabahar (Shahid Beheshti) Port during the inauguraition of the first phase in the southern Iranian coastal city of Chabahar. Photograph:( AFP )

The approved construction cost of Sittwe Port and Inland Water Terminals at Sittwe and Paletwa is Rs. 517.29 crore.

From Sittwe in the east in Myanmar to Chabahar in the west in Iran, New Delhi is taking over operations of key ports that will give a fillip to its influence in the region.

In a written reply to a question in Rajya Sabha, minister of state for shipping, road transport and chemical & fertilizer Mansukh L Mandaviya informed that the "infrastructure at Sittwe Port in Myanmar, constructed with India’s assistance, is ready for operation."

The construction of Sittwe Port is part of the Kaladan multi-modal transit transport project and its objective is to create a multi-modal sea, river and road transport corridor for shipment of cargo from the eastern ports of India to Myanmar through Sittwe port as well as to north-eastern part of India via Myanmar.

The approved construction cost of Sittwe Port and Inland Water Terminals at Sittwe and Paletwa is Rs. 517.29 crore.

India and Myanmar signed a bilateral Memorandum of Understanding (MoU) on 22nd October, 2018 for operationalisation of the port at Sittwe and Inland Water Transport (IWT) Terminals at Sittwe and Paletwa. Once fully operational, the project would encourage investment and trade and also open up alternate routes for connectivity to India’s north-east region.

India is keen to engage with ASEAN and has invited all ten heads of states for its Republic day this year. Under its Act East policy, India will also be building a road from north-east to connect with other ASEAN countries.

The development comes even as India took over the operations of a part of Shahid Beheshti Port, Chabahar in Iran during the Chabahar Trilateral Agreement meeting that was held on December 24th, 2018.

Commercial operations began at IPGCFZ with the arrival of a vessel. A Cyprus registered bulk carrier had arrived at Chabahar with 72458 MT of corn cargo. The vessel MV MACHERAS berthed at the terminal a few days back on December 30th.

According to the ministry of shipping, "this step marks the beginning of a long journey. India has written history with its engagement in Chabahar and is now leading the regional cooperation and joint efforts to support landlocked Afghanistan."

Interestingly, this is the first time India will be operating a port outside its territories. India started interacting with Iran on Chabahar Port around 2003 but a major push was received in the second half of 2014, resulting in the signing of an  MOU between the two countries for the development of Chabahar Port in May 2015.

This MOU translated into a formal 10-year contract for equipping and operating the Chabahar Port, which was executed on May 23rd, during Prime Minister Narendra Modi’s visit to Tehran.

The US has already provided a wavier to India on the port from the Iranian sanctions.

The state department had told WION last year that,"after extensive consideration, the secretary has provided an exception from the imposition of certain sanctions under the Iran Freedom and Counter-Proliferation Act of 2012 (IFCA) with respect to the development of Chabahar Port and the construction of an associated railway and for the shipment of non-sanctionable goods through the Port for Afghanistan’s use, as well as Afghanistan’s continued imports of Iranian petroleum products.‎"