She was my love, my friend, mother to our girls: Boney Kapoor tweets out from late Sridevi's account 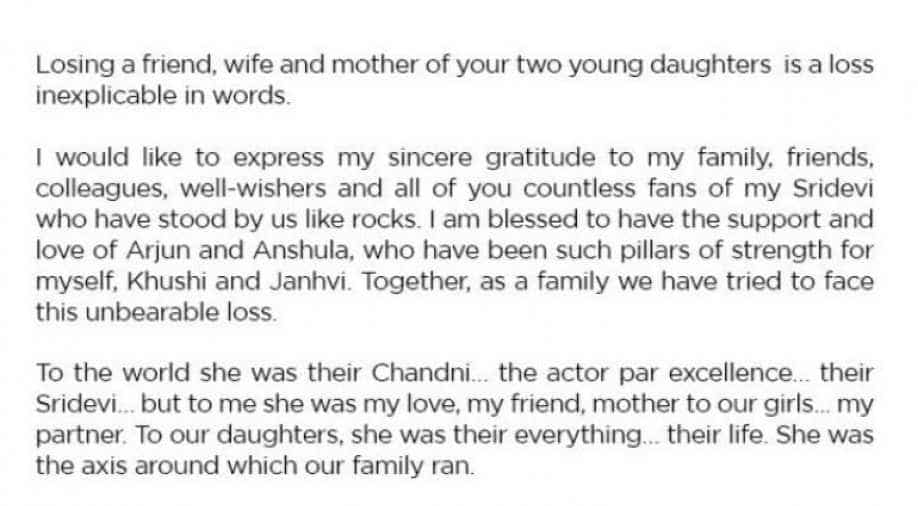 'To our daughters, she was their everything... their life. She was the axis around which our life ran,' the statement read. Photograph:( Twitter )

As the world bade adieu to Bollywood's superstar Sridevi earlier today, fans, eminent personalities and the Indian film fraternity mourned her loss. Sridevi's husband, Bollywood producer, Boney Kapoor took to Twitter a short while ago and posted a statement expressing the loss and pain his family is experiencing on 'Chandni's' sudden demise.

Boney Kapoor called her late wife his "friend, wife and mother" of his two young daughters in a statement that he tweeted out from late Sridevi's official Twitter handle.

He expressed his sadness and described the loss "inexplicable in words".

"To the world, she was their Chandni... the actor par excellence... their Sridevi... but to me, she was my love, my friend, mother to our girls... my partner. To our daughters, she was their everything... their life. She was the axis around which our life ran," the statement read.

The statement concluded by urging the media and the fans to let the Kapoor family grieve in private and let them muster the courage to move on with their lives without Sridevi.

"My only concern at this time is to protect my daughters and find a way to move forward without Sri," Boney Kapoor noted in the statement.

Sridevi's family released a statement earlier today that read, "Khushi, Janhvi, Boney Kapoor and the entire Kapoor and Ayyappan families are deeply bereaved and shocked with the untimely loss of Sridevi Kapoor. Late Sridevi Kapoor passed away in Dubai, UAE, on Saturday, February 24th. We thank the film fraternity, media, fans of late Sridevi Kapoor and all the well-wishers for their prayers, support and sensitivity during our moment of immense grief. We request you to kindly join us in paying our last respect to a remarkable actor, beloved wife and loving mother."