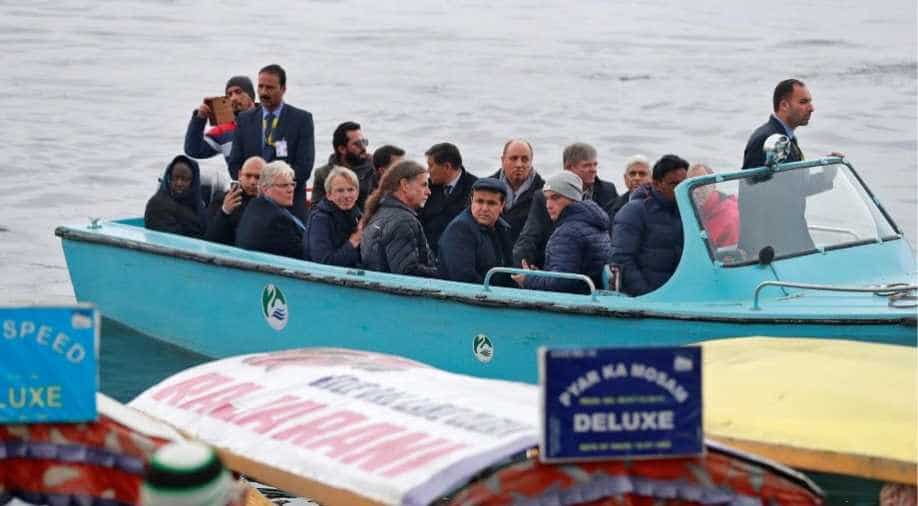 Foreign diplomats are seen in a motorboat in Dal Lake in Srinagar. Photograph:( Reuters )

On a two-day trip to Jammu and Kashmir, the second batch of foreign envoys met civil society members in the valley on Wednesday. After the visit, the envoys expressed satisfaction over the situation in Kashmir valley and said that they see "a lot of hope" in the region.

"This is a very important part of India. People I've been talking to want this region to be developed," said, Dinah Grace Akello, Uganda's High Commissioner to India.

"I met people from sports, those interested in economic growth and those who want to bring investors here. I see a lot of hope now," Akello added.

Ambassador of Denmark who was also part of the delegation said, "It's important to visit Kashmir," as he stressed on direct dialogue with locals.

"You can't have a dialogue about Kashmiris if you haven't heard what expectations and wishes they have for the future. It is important to have a holistic picture."

Meanwhile, Afghanistan Envoy Tahir Qadiry hailed 'mehman nawazi' (hospitality) of people of Kashmir and said "We have been here only a couple of hours but can see shops open, children going to school etc. Met civil society members also, they really want peace in Kashmir."

"It is great to come to Kashmir," Qadiry also said.

Security has been beefed up in Srinagar as the second batch of foreign envoys arrived in Sri Nagar today.

The latest visit is aimed at demonstrating measures undertaken by the government to restore normalcy in the newly created Jammu and Kashmir Union Territory. During the visit, the envoys will be apprised of the ground situation following the abrogation of Article 370 which granted special status to Jammu and Kashmir during their visit.

The delegation is also scheduled to visit Baramullah where they will be briefed by the Army.

The envoys are also expected to meet  Lt. Governor GC Murmu in Jammu.

The envoys will be apprised of the ground situation following the abrogation of Article 370 which granted special status to Jammu and Kashmir during their visit.

Supreme Court steps into to save two endangered bird species