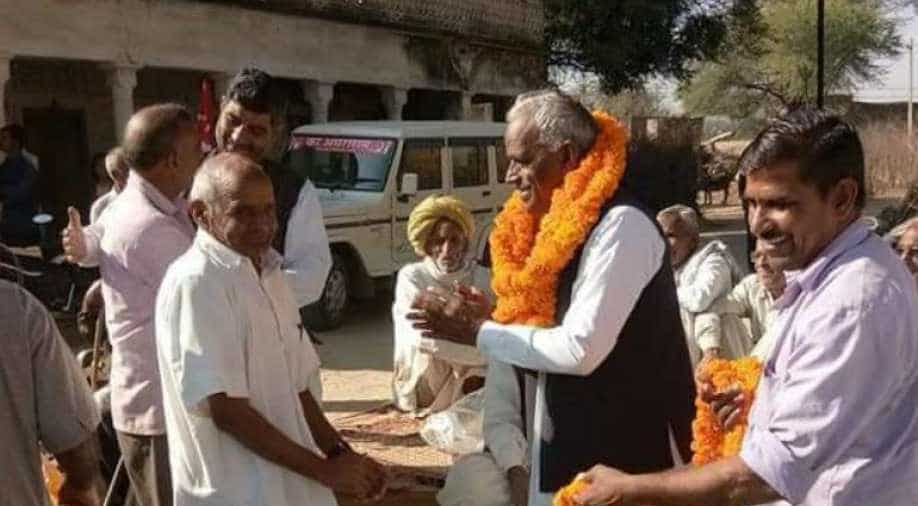 As the BJP and the Congress slug it out in the battle for Rajasthan, a Third Front of seven parties is taking shape with its chief ministerial face and firebrand farmer leader Amra Ram asserting that it's time to end the state's two-party system of "divide, loot and rule".

'Comrade' Ram, as the CPM state secretary is called by his party colleagues, is confident that the mega alliance will put up a tough fight and said that it would not be surprising if they become a king-maker like the JDS in Karnataka.

Speaking from Godiyawas village in Danta Ramgarh during his campaign tour, the 63-year-old Left leader said there was a cycle in Rajasthan of the Congress and the BJP "looting" the state for alternate five years.

This time the Bharatiya Janata Party (BJP) will definitely lose but the Congress will not be able to win, he claimed.

Asserting that the representation by Left parties in the Rajasthan Assembly will touch a record high in these elections, Ram said, "It will not be a surprise that like in Karnataka, the two main parties are left high and dry and a third force heads the government."

Ram, who is also the vice president of All India Kisan Sabha (AIKS), had led a massive farmers' agitation against the state government last year and was in jail for several days.

"In the last five years, the BJP government has worked against everybody - farmers, workers and backwards. It did not fulfil even a single poll promise," Ram said.

When asked about the reason for being so upbeat even though his party drew a blank in the last election, he said the CPM has worked on making the government concede to the common man's demands in past five years - be it the issue of electricity rates, waiving farmers loans, fixing prices for farmers' produce, crop insurance scheme or the irrigation related issues.

Before the CPI got divided to form CPM, the party had a representation from five seats, he said, talking about the Left's past electoral performance in Rajasthan. In 2008, the CPM had won three seats.

Slamming the Congress for "peddling soft-Hindutva", Ram accused the party of staying silent and not playing the role of the largest opposition party inside the assembly.

He also took on the BJP saying it makes a fool of the people by talking about Hindutva and remembers Ram temple only during elections. The issue is neither of temple, nor the cow, the real issue is of people's lives, he added.

"Rajasthan is also number-1 in killing of innocent people by lynch mobs and there are several instances of atrocities on dalits - on all these issues the CPI(M) has played the role of the chief opposition party on the streets," Ram said.

He asserted that earlier whoever won from Left parties did so on their own credentials, but this time there was support for the party as a whole.

The alliance assumes significance as the constituent parties have influence in some pocket boroughs.

In 2008 elections, the Congress had stopped four short of majority, but later six legislators of Mayawati's BSP had defected to join the Ashok Gehlot government.

Ram, who has won from here once and thrice from the nearby constituency of Dhod that was later reserved, exuded confidence that the non-BJP, non-Congress front of the Loktantrik Morcha will do well.

Ram is pitted against Congress's Virendra Singh and the BJP's Harish Chandra Kumawat.

Rajasthan will be voting for its 200-member assembly on December 7 and counting will take place on December 11.