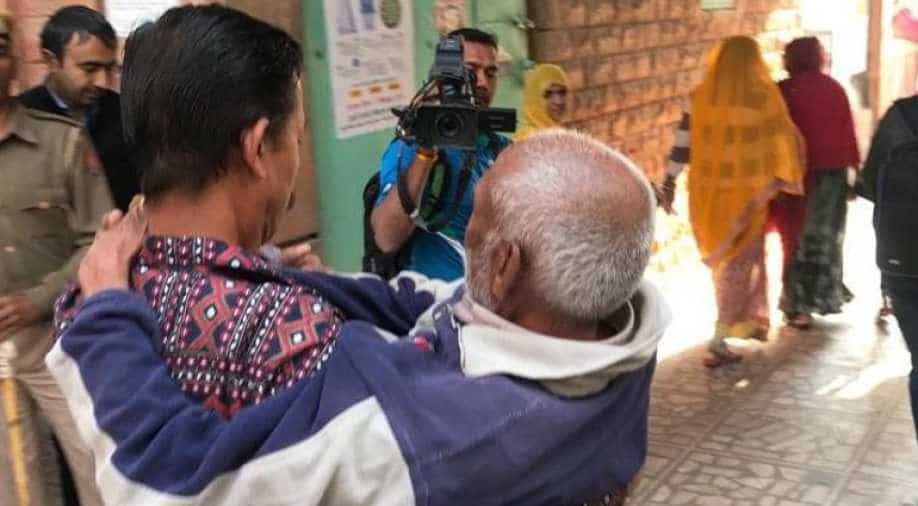 A 90-year-old man arrives at polling booth no. 104 in Sardarpura constituency of Jodhpur district to cast his vote. Photograph:( ANI )

Rajasthan witnessed over one per cent lower voter turnout in Friday's assembly poll as compared to the previous assembly election despite marathon election rallies by star campaigners of both the BJP and the Congress.

As per the Chief Election Office, voter turnout in 2018 assembly election was recorded at 74.12 per cent compared to 75.23 per cent in 2013 despite its efforts to create awareness among voters through various means.

The department was expecting a surge in voter turnout this election considering a rise of 20 lakh new youth voters in state electoral rolls.

Top campaigners including Prime Minister Narendra and Congress president Rahul Gandhi had addressed 12 and 9 public meetings respectively in Rajasthan where assembly elections to 199 of the 200 seats were held on December 7.

Contrary to the sea of the crowd in the rallies, voting percentage in the respective areas were less.

Voting percentage in other areas, including Bhilwara, Bharatpur, Sikar or Hanumangarh where the prime minister held rallies remained less than the previous assembly election.

Election rallies of Congress Rahul Gandhi too could not create a big impact among the people of the state. Voting percentage was recorded 1 to 2 per cent less than the previous assembly election where his public meetings were held.

BJP dissident and crowd puller Hanuman Beniwal who fought the election from Khinvsar assembly seats in 2013 and 2018 election could not woo the voters in his favour.

He said that 'Modi wave' had influenced the voters in the state in 2013, which was not seen in 2018 elections. In such circumstances, Congress will get the benefit in these polls, he claimed.

He said it would be unfair to blame star campaigners for less voting percentage compared to last elections as image, caste equation of candidate and other factors also affect the voting process.

Counting will be undertaken on December 11.