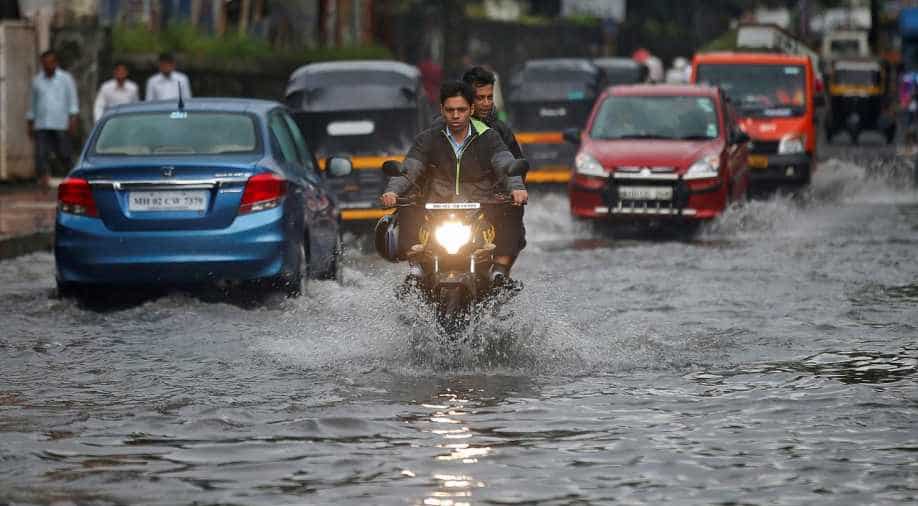 The India Meteorological Department (IMD) has predicted moderate to heavy rainfall in the city and suburbs and intense showers in some parts of the Mumbai Metropolitan Region in next 24 hours.

A day after heavy showers pounded Mumbai and neighbouring areas, the rain intensity reduced on Thursday morning and water receded in some flooded areas, leading to gradual resumption of rain and road transport services.

However, some areas in south Mumbai, which witnessed a record rain on Wednesday, were still water-logged.

This happened only after Mumbai got the highest rainfall of season in 12 hours besides the highest-ever wind speed.

The India Meteorological Department (IMD) has predicted moderate to heavy rainfall in the city and suburbs and intense showers in some parts of the Mumbai Metropolitan Region in next 24 hours.

The Colaba observatory in south Mumbai recorded 330 mm rainfall in the 24-hour period ending at 5.30 am on Thursday, seeing highest rainfall in 22 years. The Santacruz weather station in western suburbs recorded 146 mm during the period.

In August 1998, the Colaba observatory had received 261.9 mm rainfall in 24 hours which was a record for the month till now, but Wednesday's rain broke it within only 12 hours.

Even during the deluge of 2005 when 944 mm rainfall was recorded in 24 hours at Santacruz observatory in the suburbs, Colaba's reading was 161 mm.

According to BMC's update till 8 am, areas like BPT Colony at Wadala, Nair Hospital in central Mumbai, Maharshi Karve Road and Sakkar Panchayat area in south Mumbai were still water-logged.

Except for the Dahisar subway, no other subway was inundated and there was also no water-logging in Hindmata, Parel TT and Mumbai Central areas.

A Central Railway Spokesperson said local train services resumed around 7.45 am between the Chhatrapati Shivaji Maharaj Terminus (CSMT) and Thane on the main line and between CMST and Vashi on the harbour line after inspection of tracks, signals and overhead systems.

According to the Brihanmumbai Municipal Corporation (BMC), the island city recorded 215.8 mm rain, followed by 101.9 mm in eastern suburbs and 76.03 mm in western suburbs.

The 'D' civic ward, that includes upscale areas like Malabar Hill and Peddar Road, received 309 mm rainfall, while the maximum wind speed of 101.4 kmph was recorded at Marine drive around 4.15 pm, the civic body said.

The civic body has opened temporary shelters for stranded passengers and others at its schools.

On Wednesday, due to heavy water-logging on tracks between CSMT and Kurla, the suburban services on CSTM-Thane main line and CSMT-Vashi harbour line were suspended from 4 pm.

The Western Railway local train services, which were also suspended on Wednesday due to water-logging on tracks between Churchgate and Mumbai Central stations, resumed early Thursday morning, an official said.

Bus services of the Brihanmumbai Electric Supply and Transport (BEST), the city civic body's transport wing, also resumed, the BMC said, adding that services were diverted to alternate routes in a couple of locations.

South Mumbai was the worst affected due to heavy rain on Wednesday and several streets at the Marine Drive, Mantralaya and Kalbadevi witnessed heavy water-logging for the first time in recent years.

Hosalikar said intense rainfall was likely in north Palghar as a radar image indicated intense clouds over the area. The cloud cover over Mumbai and Thane was comparatively less.