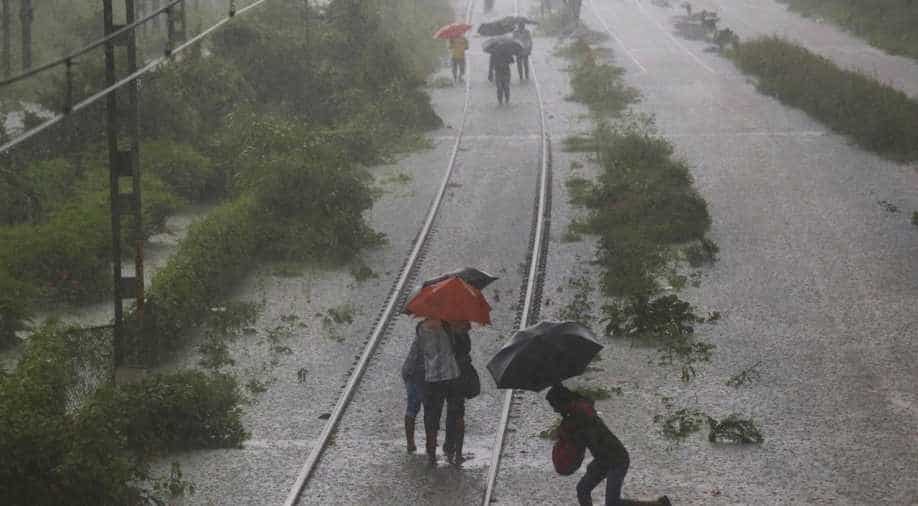 The maximum temperature in Delhi was recorded below normal at 36 degrees Celsius due to light showers overnight and through the day, and the weatherman predicted the day temperature is likely to remain below 40 degrees during the next two days.

Light-to-moderate rain lashed several states in northern India on Sunday, including Delhi, reducing the possibility of a second heat wave in the region for a week, as the IMD said a low-pressure area over the Arabian Sea could intensify into a cyclonic storm and move into the upper west coast.

The maximum temperature in Delhi was recorded below normal at 36 degrees Celsius due to light showers overnight and through the day, and the weatherman predicted the day temperature is likely to remain below 40 degrees during the next two days.

Several residents of Delhi-NCR witnessed a rainbow in the sky and sports enthusiasts played volleyball after the rainfall. Haryana, Rajasthan and Uttar Pradesh too received rainfall.

Kuldeep Srivastava, the head of the India Meteorological Department's regional forecasting centre, said the temperature in Delhi-NCR is likely to increase by 2-4 degrees between June 1 and June 3.

As another western disturbance is expected over northwest India in the first week of June, a heat wave is unlikely to return to the region before June 8, Srivastava said.

A fresh western disturbance and southwesterly winds along with the formation of a low-pressure system in the Arabian Sea will bring moisture to Delhi-NCR.

The low-pressure system is likely to turn into a depression and then into a cyclonic storm before moving into north Maharashtra and south Gujarat by June 3, said the IMD.

It said the fishermen who have ventured into the sea along the north and south Gujarat coasts should return by Sunday and not go out till June 4.

The Ahmedabad meteorological centre of IMD advised hoisting of "distant cautionary (DC)-1" storm warning signals at all ports on north and south Gujarat coasts, as the sea condition was very likely to be "rough to very rough," with wind speed reaching 90-100 kmph gusting to 110 kmph by June 4.

In southern India, maximum temperatures were appreciably above normal (3.1 to 5.0 degrees) at isolated places in Goa, Tamil Nadu, Puducherry; and above normal (1.6 to 3.0 degrees) in coastal Karnataka, West Madhya Pradesh and Kerala.

It said it will issue the second stage Long Range Forecast for South-West Monsoon Season (June?September) rainfall on Monday afternoon.