Railways to operate 2,600 Shramik Special trains in next 10 days to ferry 36 lakh home 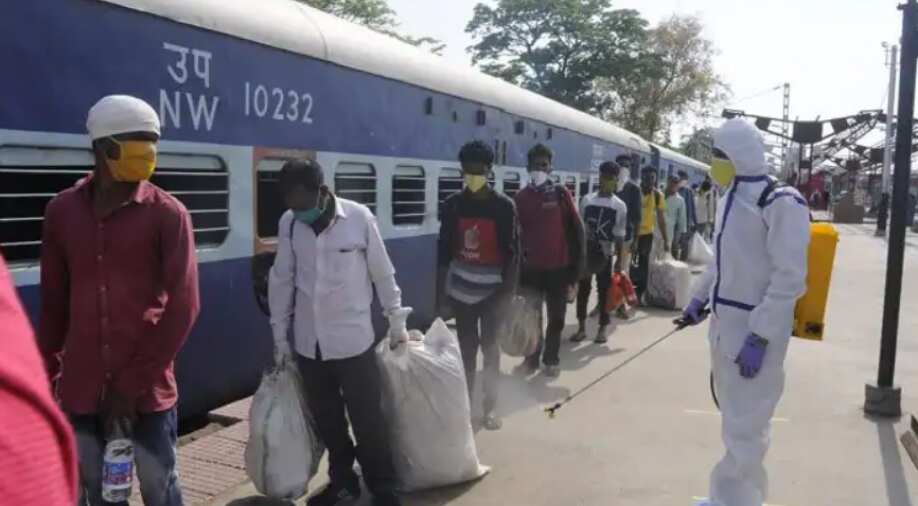 The railways has run 2,600 Shramik Special trains in the last 23 days carrying around 36 lakh stranded migrants.
He used graphics to show how railways had increased the number of trains from four on May 1, when the operations started, to 279 on May 20.

The Railways has drawn up a schedule to operate 2,600 Shramik Special trains over the next 10 days across the country to ferry around 36 lakh migrant workers, stranded due to the COVID-19 lockdown, to their home states, Chairman, Railway Board V K Yadav said on Saturday.

He said that the railways has run 2,600 Shramik Special trains in the last 23 days carrying around 36 lakh stranded migrants.
He used graphics to show how railways had increased the number of trains from four on May 1, when the operations started, to 279 on May 20.

"We have operated 260 Shramik Special trains every day on an average for the last four days, carrying three lakh passengers daily. In next 10 days, 2,600 Shramik Special? trains will carry 36 lakh migrants. We can also run trains within states, around 10-12 lakh can travel on them," Yadav said.

To a question on fares of the special trains to be operated from June 1, he said the railways was charging pre-lockdown normal fares only.

He reiterated that 85 per cent of the expense of Shramik Special trains is being borne by the Centre and the states are only paying 15 per cent in the form of fares. "Unreserved journey has been stopped for now in the interest of social distancing. Trains will be full only as per designated capacity,? Yadav said.

"It's a tough situation for everyone in the world. Attempt is to move to normalcy gradually. We have studied patterns of demand on routes and trains have been introduced based on that," he said.

He assured migrant workers that the railways will continue to operate the Shramik Special trains till the time states require them.
Responding to a letter sent by the West Bengal government seeking stalling of all migrant trains to the state till May 26 due to Cyclone Amphan, Yadav said it was due to a natural calamity and things will be back to normal soon.

"The West Bengal chief secretary wrote to me that restoration work is underway and they'll tell us soon when they will be able to receive the trains. As soon as they give us clearance, we'll run trains to West Bengal," he said.

Responding to a question on why certain trains were being diverted to longer routes, Yadav termed it as normal affair.

"Most of the trains are going to only one or two routes to Uttar Pradesh and Bihar so there is route congestion," said Yadav on the incident where a Gorakhpur bound train was diverted via Odisha.

"This method is employed even during normal times to avoid congested routes," he said.

He also said that around 5,000 beds in 17 dedicated hospitals and 33 isolated hospital blocks have been earmarked for COVID-19 care.

Yadav further said isolation coaches meant for coronavirus-infected people were yet to be deployed as he highlighted that 50 per cent of them will be used to run Shramik Special trains.

An order issued earlier this week stated that 60 per cent of around 5,200 coaches which have been converted so far will be used in migrant special trains.

The railways is currently running 15 pairs of special trains on the Rajdhani route while 100 pairs of trains will begin operations from June 1.