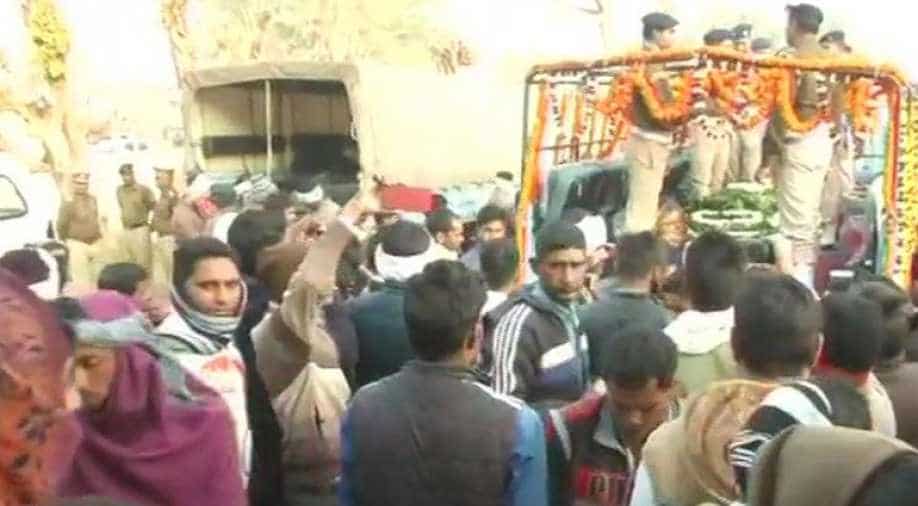 Amid slogans of 'Pakistan Murdabaad', mortal remains of slain Central Reserve Police Force (CRPF) personnel draped in the Indian flag were brought to their respective native places on Saturday.

Amid slogans of "Pakistan Murdabaad", mortal remains of slain Central Reserve Police Force (CRPF) personnel draped in the Indian flag were brought to their respective native places on Saturday.

Massive anger has erupted across the nation over the ghastly attack in Jammu and Kashmir`s Pulwama that claimed the lives of 40 CRPF jawans.

While people paid tributes to the martyrs by holding candlelight vigils, demonstrations were held at many places against Pakistan with demands being put forth to take action against the neighbouring country for its "continuous support to terror groups."

On Friday, agitators in Ahmedabad thrashed posters of Jaish-e-Mohammed (JeM) chief Masood Azhar during a protest against the dastardly terror attack in Pulwama.

Condemning the suicidal attack, Prime Minister Narendra Modi on Friday warned Pakistan by saying, "The forces behind this act of terrorism and those responsible for it, will be definitely be punished."

The Narendra Modi government has called an all-party meeting on Saturday to hold consultations with the opposition parties in the wake of Pulwama terror attack. Prime Minister Modi, Union Home Minister Rajnath Singh, Defence Minister Nirmala Sitharaman, Congress president Rahul Gandhi, other political leaders and Chiefs of Indian security forces paid their tributes to all 40 brave hearts at the Palam Airport on Friday.

In the deadliest attack on security forces in Kashmir, over 40 CRPF personnel were killed on Thursday when their convoy was targeted by a suspected suicide bomber of Pakistan-backed Jaish-e-Mohammad in Pulwama district on the Srinagar-Jammu National Highway.

The convoy of 78 buses, in which around 2500 CRPF personnel were travelling from Jammu to Srinagar, came under attack at around 3.15 pm at Ladhu Modi Lethpora.