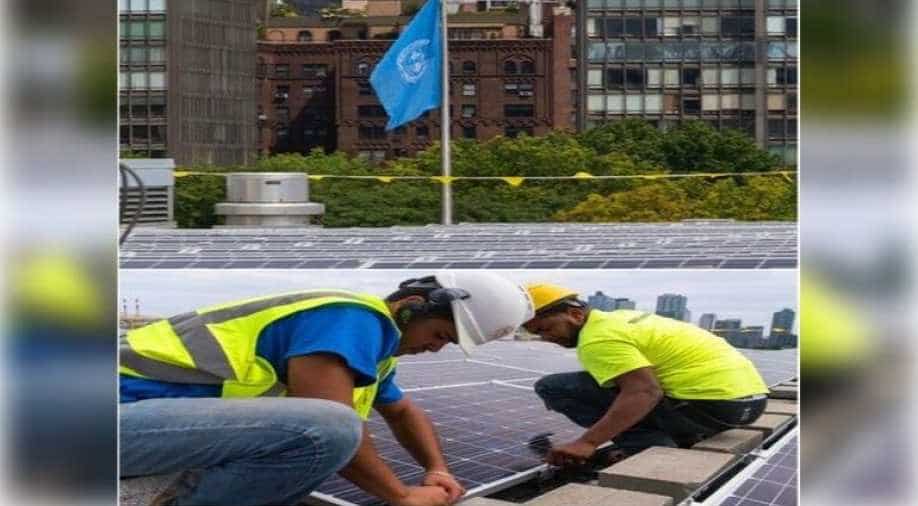 Total 193 photovoltaic panels been set up each panel having a size of 71.41kw. Photograph:( ANI )

India has gifted $1 million for a Solar Panel and Green Roof Project under which solar panels will be installed on the rooftop of the headquarters of United Nations headquarters.

India has gifted $1 million for a Solar Panel and Green Roof Project under which solar panels will be installed on the rooftop of the headquarters of United Nations headquarters.

The energy that will be generated in the park is equivalent to energy that would have been created through the use of 30,000 kilograms of coal.

It also has carbon sequestration of 1000 seedlings which will grow into trees over 10 years.

In total 193 photovoltaic panels have been set up with each panel having a size of 71.41kw.

Alongside the solar panels, there is also a green roof which has vegetation.

It is the first time that solar energy will be produced at the UN headquarters in New York.

The event at Houston on September 22 will be the largest gathering for an elected foreign leader other than the Pope and it will be a celebration of the cultures of India and the US.

Ahead of the big event — US President Donald Trump has said that he could announce something from the stage. Howdy Modi is an opportunity for US President Trump to win some support from the Indian community. The next presidential election in America is scheduled for 2020 in which the influential Indian-American community is expected to play a big role. Trump, a Republican, has already announced his candidature.

According to a 2018 survey, Indian Americas are much more disapproving of Trump — than the average Asian Americans.

This will be the third meeting between Modi and Trump this year. The previous two were on the sidelines of the G20 Summit in Japan in June and the G7 Summit in France in July.