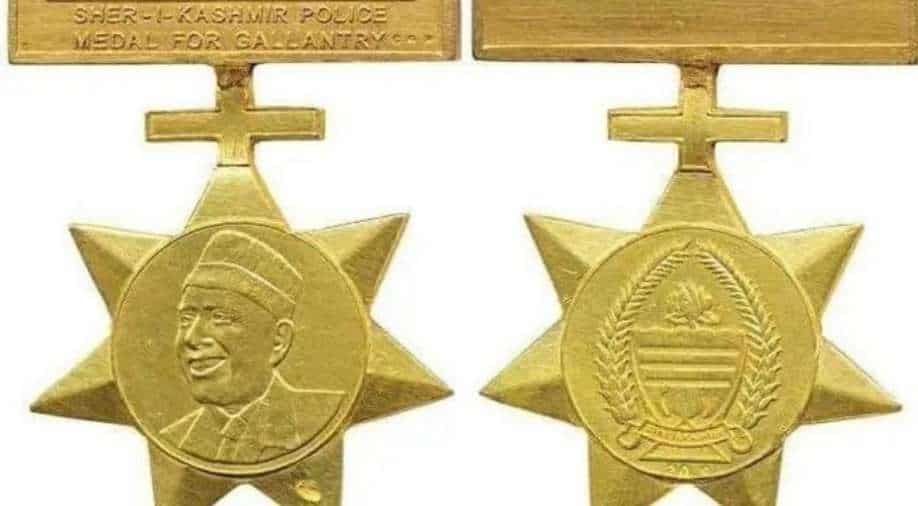 J&K's police medal for gallantry and meritorious services will not have an embossed image of Sheikh Abdullah. Photograph:( Twitter )

The National Conference Party which was founded by Sheikh Abdullah has reacted and said that it's a ploy by BJP and its allies. The party says It won't make any difference to the name and party

In India, the politicians of Jammu and Kashmir (J&K) have lashed the Bharatiya Janata Party (BJP)-led central government over removing the image and name of Sheikh Abdullah from the police medal and other institutions. Abdullah has been the symbol of Kashmir's accession to India.

The J&K government had ordered the replacement of Sher-e-Kashmir Sheikh Mohammad Abdullah embossed on one side of the police medal for Gallantry and Meritorious Service with ‘The National Emblem of Government of India’.

Former J&K Chief Minister Mehbooba Mufti said that it reflects the "sick mindset" of the BJP. She said that Sheikh Abdullah lives in the hearts of the people and erasing his pictures would not get them anything.

"He is a big stalwart and removing his picture wouldn’t matter much. It reflects a sick mindset. He has played a major role in shaping J&K. He merged J&K with India. After 70 years, if his identity is being erased, it wouldn’t matter for his personality. Sheikh Abdullah took a bold decision to join hands with India and rejected Pakistan," said Mehbooba Mufti.

The National Conference Party which was founded by Sheikh Abdullah has reacted and said that it's a ploy by BJP and its allies. The party says It won't make any difference to the name and party.

"Removing the name of the party's founding leader late Sheikh Mohammad Abdullah from government honours is a ploy of BJP and its allies and it has not made any difference to the party. It's their misconception that this would change anything or take Sheikh Abdullah away from the hearts and minds of Kashmiri people. The love that Kashmiri People have for Sheikh Abdullah is not going to change," said Imran Nabi Dar, spokesperson NC.

The BJP has welcomed the step and said that Kashmir has had many leaders and Sheikh Abdullah was not the only one. They also say that every building in J&K cannot be called Sher-i-Kashmir/ Sheikh Abdullah.

"We welcome steps like these. Kashmir has had many tall leaders other than Sheikh Abdullah, we can't have every building named after Sheikh Abdullah. We have leaders like Maqbool Sherwani too, we welcome these steps and buildings in Kashmir need to be named after those leaders who have laid their lives for the Country," said Altaf Thakur, the state spokesperson of BJP.

Government in January 2020 had removed the word 'Sher-e-Kashmir', a reference to National Conference founder Sheikh Mohammad Abdullah, from the police medal for gallantry/ meritorious services.