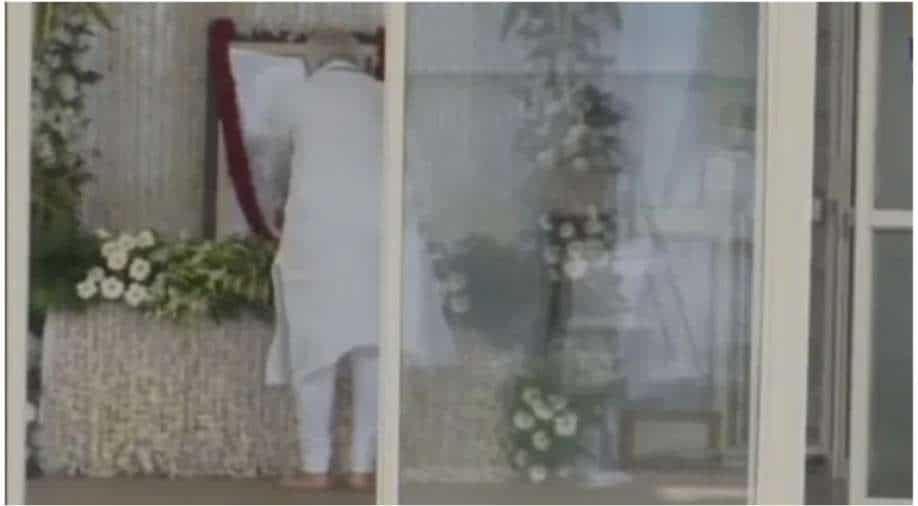 The PM gave a floral tribute to the departed leader and spent some time with Patel's kin and consoled the family Photograph:( IANS )

PM Narendra Modi arrived in Gujarat for his 2-day visit on Friday. Soon after his arrival in Ahmedabad, the PM directly went to former Gujarat CM Keshubhai Patel's residence. Keshubhai Patel passed away a few days ago. The PM gave a floral tribute to the departed leader and spent some time with Patel's kin and consoled the family.

"Modiji recalled his long association with Keshubhai and asked us about his last moments, a family member told reporters after the PM left Patel's residence.

Modi had on Thursday paid rich tributes to Patel, saying he had mentored many BJP workers, including him.

Modi had remembered Patel through a series and tweets and shared some old photographs with the former Gujarat CM.

"Our beloved and respected Keshubhai has passed away. I am deeply pained and saddened. He was an outstanding leader who cared for every section of society.
"His life was devoted towards the progress of Gujarat and the empowerment of every Gujarati," Modi tweeted on Thursday.

After meeting Patel's kin in Gandhinagar, the Prime Minister visited the grieving kin of Gujarati cinema superstar Naresh Kanodia and his music composer-brother Mahesh Kanodia, both of whom died recently, at their residence in the state capital.

Naresh Kanodia (77) died on October 27 at a hospital while undergoing treatment for coronavirus, just two days after his elder brother Mahesh (83) died due to age-related ailments.

Both brothers were associated with the BJP. While Naresh Kanodia was a former MLA, Mahesh Kanodia had served as a BJP MP.

Modi paid floral tributes to the famous duo and spent some time with their family members, including Naresh Kanodias son Hitu Kanodia, a sitting BJP MLA.

"Modiji fondly remembered my father and uncle. He told us that both the brothers loved each other immensely and now they have became immortal."

"He also regretted not coming earlier to meet them," Hitu Kanodia told reporters.

This is Modi's first visit to his home state after the outbreak of the coronavirus pandemic.

Later in the day, PM Modi inaugurated 'Ekta Mall' a special store constructed near the Statue of Unity. In Ekta Mall, tourists can buy handloom and handicraft products from different states under one roof. PM Modi spent considerable amount of time at stall selling traditional items from Jammu and Kashmir and the north-east region.

The mall, developed on the theme of Unity in Handicraft & Handloom Diversity, is spread across 35,000 square feet near the 182-metre tall Statue of Unity at Kevadiya in Gujarat's Narmada district. The imposing monument, dedicated to Sardar Patel, has emerged as a popular tourist site in Gujarat. Modi, accompanied by Gujarat Chief Minister Vijay Rupani, later visited different emporia in the Mall.