Over 60% polling recorded till afternoon in Jind bypoll 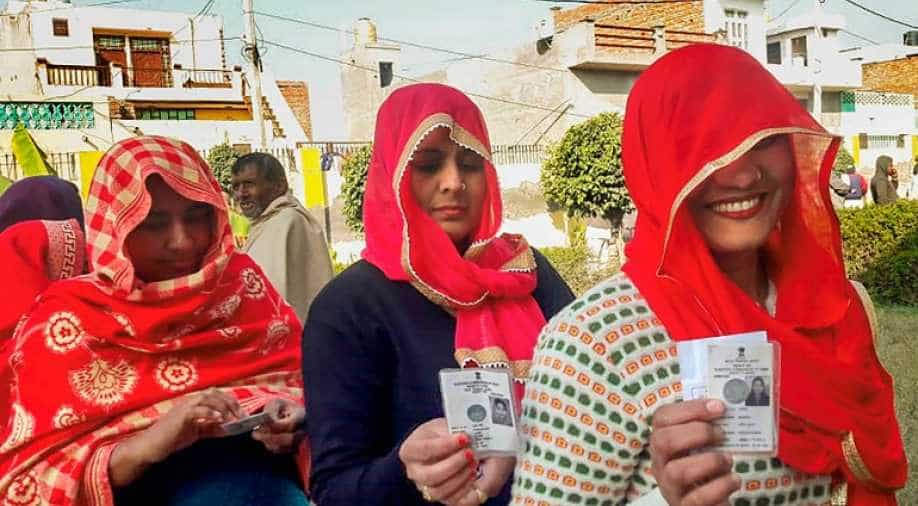 Voters show their voter identity cards as they wait in a queue to cast votes for Jind bypoll elections, in Jind, Haryana. Photograph:( PTI )

Counting of votes will take place on January 31.

Over 60 per cent polling was recorded till 3 pm in Haryana's Jind assembly bypoll, being touted as a prestige battle between the ruling BJP and opposition Congress, which has fielded its prominent leader Randeep Singh Surjewala.

The contest is also important for the Jannayak Janata Party (JJP) which was formed after a split in the Indian National Lok Dal (INLD).

The by-poll was necessitated following the death of INLD MLA Hari Chan Middha, whose son Krishna Middha recently joined the BJP and is the saffron party's candidate for the byelection. The INLD is banking on Umed Redhu to retain the seat.

The JJP has put its weight behind Digvijay Chautala, the younger son of jailed leader Ajay Singh Chautala, who broke away from the INLD and floated the party.

Twenty-one candidates including two women are in the fray.

The polling began at 7 am and will continue till 5 pm.

In the final two hours of polling, there was a rush outside booths, especially in rural parts of the assembly constituency, as voters queued up to exercise their franchise.

Officials here said 15 per cent polling was recorded in the first two hours and by 3 pm, the poll percentage had crossed 60 per cent.

"The poll percentage at 3 pm was 60.12," an official said, adding that no untoward incident was reported.

Nearly 1.7 lakh people, including 80,556 women, are eligible to vote, the officials said.

There are 71 polling booths in rural areas of this constituency and 103 booths fall in urban areas.

Besides,500 home guards and over 200 personnel drawn from the CRPF and the Rapid Action Force were also deployed.

The Jind assembly segment has been divided into 24 sectors, with six deputy superintendents of police being made in-charge to oversee security arrangements.

Counting of votes will take place on January 31.

Arch rivals BJP, Congress, INLD and JJP are eyeing the results as a self-assessment exercise ahead of Lok Sabha polls this year.

The high-stakes election is considered a referendum on the Manohar Lal Khattar government and also a semi-final ahead of Lok Sabha elections.