Opinion: Why Indians are waging war over statues of Lenin, Periyar, Syama Prasad 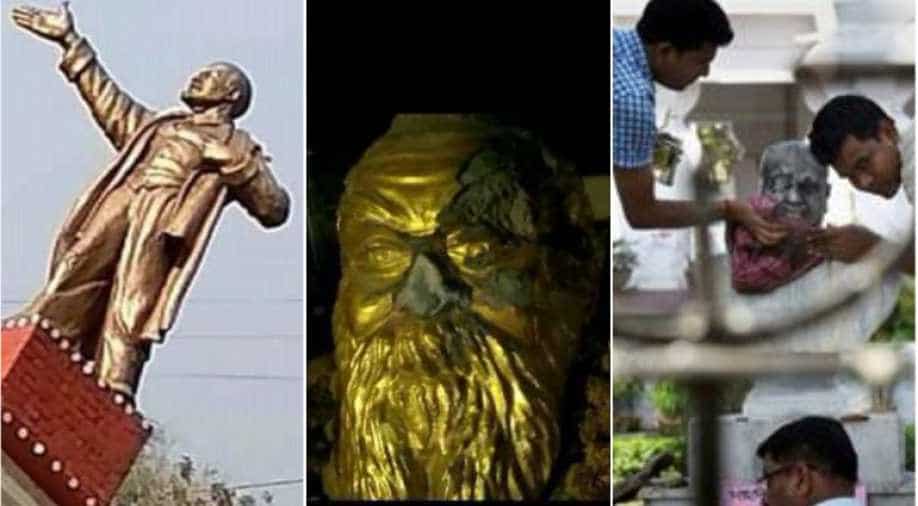 Statues are symbols of politics in many parts of the world. They are associated with cult politics, subversive politics, authoritarian regime, religion and change both from above and below. Statues stand as symbols of power, as an embodiment of certain philosophy.

With the imposition of colonial rule in the subcontinent, the metropolises, such as Chennai and Mumbai and, particularly, Kolkata, witnessed a plethora of statutes being set up at crucial public places. Maidan, the largest green space of Kolkata which separated the British part of the city from the native quarters, boasted statutes of British governor generals and other eminent personalities of the British Raj, including Lord Curzon, Kitchener, Roberts, Minto, Northbrook and Canning.

While men are mortal, statues are there to stay. For the colonialists, this was the best way to ingrain in the public memory of its subjects the face of its rulers. These statues inspired awe and reverence for the British rule beyond the clutch of draconian laws of the colonial masters.

When eventually the colony struck back at the heart of the empire, a role reversal happened. Not only were some of these vestiges of colonial rule removed but many new statues came up after independence, commemorating the 'makers of modern India'. Gandhi, Subhash Chandra Bose, Nehru and statues of women freedom fighters, such as Matangini Hazra was there for us to see and celebrate.

The independent nation-state used these nationalist icons to assert an ideological continuity in the imagination of its citizens.

Thus, while the putting up and taking down of statutes were very much part of the political landscape of modern India, what was absent was the violence and the compulsion of electoral politics. That is something that emerged in more recent times as communities and political groups jostled to remake and redefine, through statutory politics, the political narrative of the country.

We, and the statues that we have built, have come a long way from representing the Indian 'us' from British 'them'. It has fragmented and splintered into multiple variants of regional political assertion. Consequently, new statues are not simply being built to take the place of the old but political aggression is finding expression in the form of defacement of statues of people who do not fall within our preferred political ambit.

In India, it is not the first time statues have been defaced. Statues of Ambedkar routinely got defaced in Uttar Pradesh. Upper caste saw these as the ugly assertion of Dalit politics. Some saw them as a land grab exercise but statues did not go away. Mayawati went even a step further. She got her statues erected under her supervision only.

More recently, similar incidents of defacing and disfiguring of statues have happened in Tripura, West Bengal and Tamil Nadu. In all these cases, there have been forms of physical acts of removal, violence and indecency. The similarity, however, ends here. The violence associated with Lenin, Shyama Prasad Mukherji and Periyar is related to coming of the RSS-BJP combine as the sole national party and their civilizational worldview. It is the same distinction which RSS draws between Gandhi family and the Congress Party. Indian philosophy and western influences. Though the organisation of RSS itself has been modern, the state of Tripura has put on the table the ideological frontier of the RSS-BJP.

It is not about Lenin only. It is about communism’s take on religion, internationalism which put the Left in a dock when China invaded India and about a value system which with pro-labour ideas also threatened the cultural vision of India which RSS has. It is for this reason that BJP’s engagement with protests in JNU acquired an ideological angle which was pinned to nationalism, commitment to India’s border and sense of being ‘true’ Indian.

Periyar, on the other hand, is the father of Dravidian politics in India. His rationalist thoughts challenged the idea of religion and its hierarchies. It made Tamil Nadu’s politics very different from the rest of India. Despite, places of high Hinduism associated with Tamil Nadu, it was Periyar’s politics which reshaped the cultural map. He did not believe in God but his supporters made him a God like icon of him.

Though BJP is trying to give Tripura incident a spin of upsurge, we should not forget that Left was not a dictatorship and won elections. Tripura was neither Iraq nor USSR where democracy had a chequered history.

Statues in India, as well as outside, are, primarily, an expression of power and preservation of memories. Most political parties have their leaders enshrined in the form of statues in the Parliament. Every nook and corner of Parliament is littered with them. The present controversy is an expression of the contested idea of India which includes the debate on inclusiveness, nationalism, modernity, tolerance and individual expression.

The violence that has come to surround politics of statues in India can create problems for BJP. Tamil Nadu is one area where BJP wants to have a regional partner. What may benefit them in the North East may hurt them in some other parts of India. The only problem is for Congress which will have to pick sides. The Congress is in no position to argue against the politics of statuary because it has done the same when in power. It ensured that country was littered with statues of Indira and Rajiv. Congress does not belong to the Left but cannot be seen not taking a position against violence.

The statues of politicians or ideologues are here to say. These statues are just like idols; one may not understand the ambiguous philosophical aspect of religion but will bow down in respect to a 'murti' of god and goddess. Similarly, in lieu of proper political education, political parties will continue using larger and grandiose statues of their leaders to impress the electorates. Statues, any day, will work more effectively, than political leaflet, particularly in a country like India where the literacy rate is low. But while we accept statutory politics, it is imperative that in a democratic polity, instead of vandalising opposing political insignia, it will serve the interests of the citizens better if we can accommodate statues representing different positions of a political spectrum.