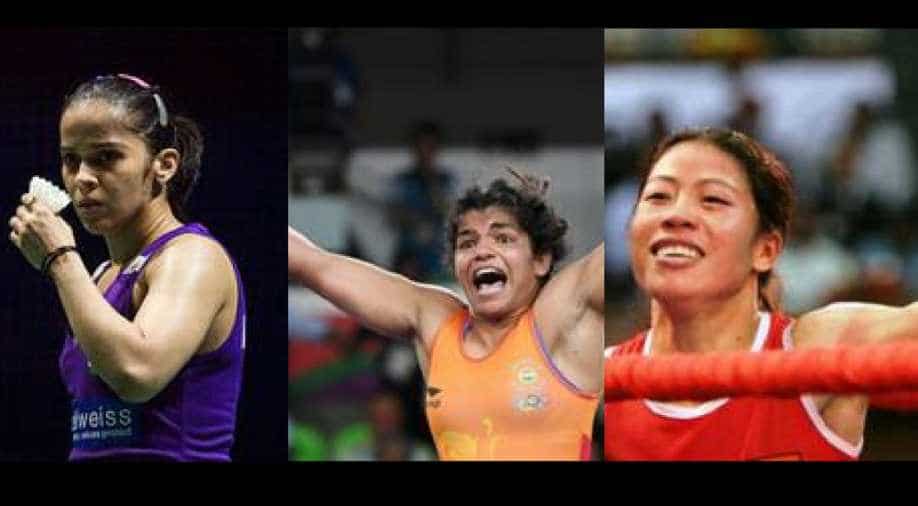 "I am the first ever female AMA pro hill-climb racer. I’m rather excited by all the attention I am getting because of this, but I’m also a little disappointed that it has taken so long for women to step into this position" -Cathy Templeton

In the Indian context, for ages, men have dominated sports. However, in recent times, we are witnessing some forms of women empowerment in sports.

India have won their two opening games. Pakistan have lost theirs, so the pressure will be on them. In photo: Indian skipper Mithali Raj bats against England. (Zee News Network)

Sachin and Dravid might have inspired a thousand boys to pursue cricket but to encourage a single girl to play cricket, a Mithali Raj and Jhulan Goswami was needed.

I have seen many boys going crazy after the killer looks and fighting style of Vijender Singh but to incline a girl towards boxing, a Mary Kom was needed.

It is India's second medal in the 2016 Rio Games after wrestler Sakshi Malik bagged bronze in the women's 58 kg category. (Reuters)

It was PV Sindhu who made the nation proud when she won a shining silver at the 2016 Summer Olympics and became the first Indian woman to win an Olympic silver medal motivating millions to be a shuttler.

There are 'few' other women in Indian sports in the past who have put India on the world map of sports, like sprinter P.T Usha also known as the queen of Indian track, the freestyle Indian wrestlers, such as Sakshi Malik, Geeta Phogat, Babita Phogat, Aditi Ashok has been an Indian professional golfer, Karnam Malleswari represented India in weightlifting.

India has somewhat arrived when it comes to women in sports. They have fought various constraints, social factors and taboos to enter into sports.

It is only today with women like tennis star Sania Mirza, ace cricketer Mithali Raj and 'the golden girl of Indian badminton,' Saina Nehwal coming into their own with an immense amount of media coverage that women have been accepted as major sports stars and role models in their own right.

Even Bollywood is playing an important role in showcasing the life and journey of some women personalities, like Priyanka Chopra playing Mary Kom, Shraddha Kapoor will play Saina Nehwal in the biopic of the young badminton player.

When we talk about the US, Russia or any other sports enthusiast countries, we can see the governing bodies have put in a lot of efforts to encourage new entrants in the field of sports irrespective of gender. If the candidate has potential then spots association and governing bodies will invest in her/him from the tender age of 5-6.

Norway, a country with a population of five million dominated the recently concluded Winter Olympic, has the philosophy "sport for all" that helped the youth to get involved in all type of sports and have a flourishing future.

Ragnhild Mowinckel, an Alpine skier of Norway said, "The culture and the environment we grow up in, it’s great for us."

Women are far more visible in sports today than at any previous point in history but India still lacks behind due to the dirty politics of association and the ugly side of some officials.

As a sports writer, I feel very positive when I see lots of women tournament happening around the world in various sports, the tournaments that have the potential to leave social and economic legacies.

A few cases still bother me, when a US gymnastics team doctor Larry Nassar was charged with sexual abuse of some elite gymnasts. He assaulted victims during treatment for injuries.

On the one hand, women face disparity in salaries, access to sponsorships but we must not forget that sports act can as a catalyst to amplify women's voices against gender barriers and discrimination but the dark side of sports events that cause violence against women and girls have to be removed to instill women empowerment in sports in real terms.