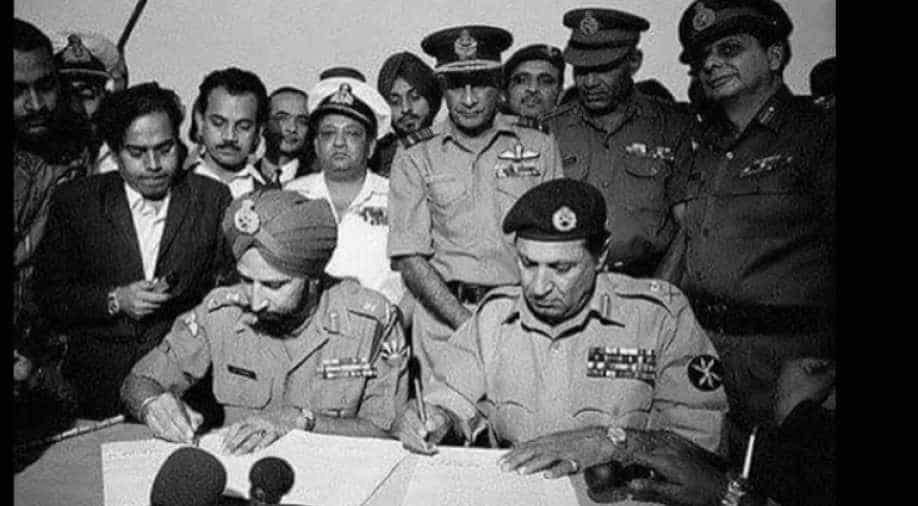 16th December 1971 offers Indians a sense of pride as a big and powerful nation. Photograph:( Others )

When 16th December comes every year, fairly widespread commemoration almost in the form of celebration or jubilation can be observed in India. Some celebrate what they think was a decisive Indian military victory over their eternal adversary Pakistan. Some gleefully celebrate the dismemberment of Pakistan in the hands of India in that narrative of glory. 16th December 1971 offers Indians a sense of pride as a big and powerful nation of the East especially in the backdrop of military humiliation in the hands of Chinese and stalemate with Pakistan in the previous occasions. The former defense minister of the current BJP government Manohar Parikkar openly boasted that, the way India had dismembered Pakistan and created Bangladesh the same thing they may repeat with Pakistan in Baluchistan.

Bangladeshis, while acknowledging India’s help, are utterly infuriated at how the nationalist narrative misses the unprecedented political mobilisation, leading up to the liberation war of Bangladesh in 1971. General Ayub Khan’s rule in the sixties made East Bengal or East Pakistan literally a colony of its west wing with the much bigger chunk of the then national budgetary allotment going to the west wing which had the smaller chunk of the population. Most of the export earnings of Pakistan were from the east wing where 56% of pre-1971 Pakistan’s population lived.

Sheikh Mujibur Rahman of Awami League party, seeing this neo-colonisation and extraction of East Bengal, proposed a six-point loose confederation formula for Pakistan and that found incredible traction in the polity of East Bengal (East Pakistan). Awami League along with the parties in the west wing eventually brought down Ayub Khan’s rule in 1969’s through the mass uprising.

An election was held under the new military ruler from the west wing of Pakistan in late 1970, and the Awami League party of East Bengal not only swept the eastern wing but also achieved a majority in the national parliament on its own with all its seats from the east. The regime and the major political party of the West Pakistan, the People’s Party (PPP) didn’t anticipate such a widespread and overwhelming support for Awami League. They rather expected a fractured mandate.

Negotiation began in early 1971. By then the Awami League leader Sheikh Mujibur Rahman became a de facto leader with provincial officials and even judges taking orders, instructions and guidance from him alongside the general public. Chief justice of East Pakistan high court refused to swear in General Tikka Khan as governor and before that stories were making rounds in Dhaka that the cook of the governor’s house refused to cook for the governor until Sheikh Mujib permitted him to do so.

Pakistan Army started their crackdown on 25th March night, but even before that many in the Bengali army, border guard and police units revolted against the Pakistan government. In the subsequent months about 10 million East Bengali refugees, one-seventh of the population, crossed over to India.

Exile government was formed in India. Under the leadership of the East Bengal Regiment, mass armed guerrilla warfare started against Pakistani forces and establishment in East Bengal. Some predicted a long Vietnam like struggle towards freedom, whereas others, including the majority members of the exile Bangladesh government in India, wanted Indian military intervention to make the independence faster. The later happened eventually. But the political momentum for freedom in East Bengal was so massive and overwhelming that even if the Indians didn’t intervene militarily in December 1971 there was no going back for Bangladeshi people and leadership in the Pakistani fold. There would have been a protracted war of attrition between the Bangladeshi freedom fighters, supported by the masses, and the isolated Pakistani occupiers, resulting in another type of humiliating loss for the latter.

Most Bangladeshis, other than some anti-Indian quarters, wholeheartedly admit Indian help and sacrifice of Indian soldier’s in liberating Bangladesh in late 1971 and the present government has honoured Indian war heroes. In 1971, the success of the Indian army in reaching Dhaka so fast and forcing Pakistan's eastern army to surrender is remarkable.

However, there are important details of it that many often tend to ignore, and which were critical factors in the success of Indian army’s tactical manoeuvres and strategic advantages. These are support of the friendly and welcoming Bangladeshi masses and key information and logistic support of Bangladeshi freedom fighters.

Nizai adopted a border fortress military tactic to hold Indian army in the periphery rather than gradual withdrawal tactic to the center of gravity which is Dhaka basin, and fight the decisive battle there.

Indian army formations, initially, failed to make a breakthrough in the Pakistani defences in the borders and in some cases suffered heavy causalities. It was Bangladeshi freedom fighters and common people who showed them ways to go around the Pakistani positions to the enemy’s rear. This led to the ultimate success of India-Bangladesh joint forces to reach Dhaka faster and forced Niazi to surrender, before the arrival of American and Chinese help. Speed was key which was only achieved by this tactic and it was not in the minds of Indian military planner when they issued campaign orders and operational plans.

People cheered Indian army and helped them in whatever way they could. In Tangail in north-central Bangladesh villagers prepared food for Indian paratroopers whose logistics was in disarray. In Raipura of Comilla local Awami League leaders, workers and villagers made big country rafts to ferry Indian tanks across mighty Meghna river towards Dhaka. These are just one or two examples of numerous such help of immense operational importance.

There is no doubt that India helped and, especially, the statesmanship of Prime Minister Indira Gandhi was vital for the birth of Bangladesh in just nine months. But, in reality, it’s Bangladesh that was the locus of affairs in its emergence as an independent nation-not India.

How COVID-19 virus evolved in the laboratory