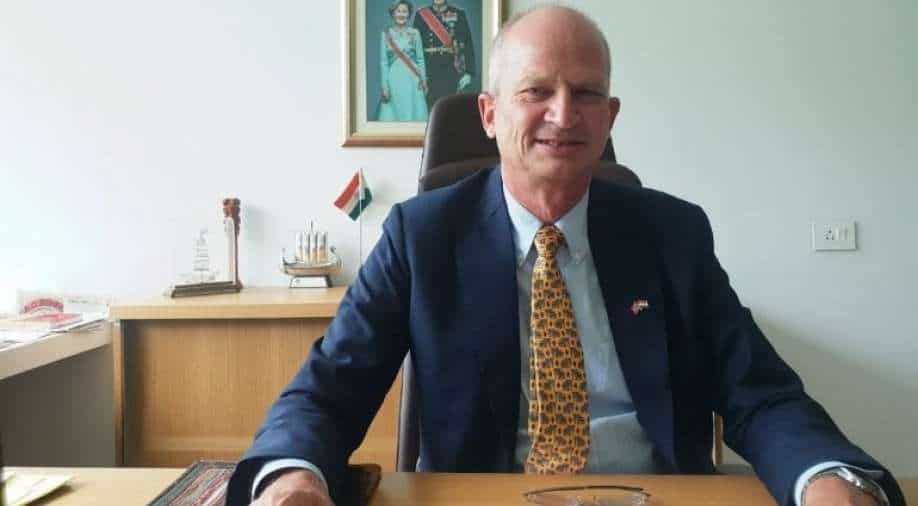 Amid the second wave of Covid pandemic, Norway had sent assistance to India and both countries have been cooperating to deal with the pandemic. Norwegian government announced a contribution of 20 million Norwegian Kroners (2.4 mn USD) towards Covid relief in India amid the covid crisis

Pitching for strong ties with India, Norway's envoy to Delhi Hans Jacob Frydenlund has highlighted how both countries are working on oceans, climate, and "a clear emphasis on green and clean and renewable energy".

Speaking to our WION's Sidhant Sibal, Hans Jacob said, "point of gravity in international politics is moving eastwards" and to develop opportunities with India, Norweigan government in 2019 developed an India strategy because "India is becoming more important for Norway".

Norwegian government announced a contribution of 20 million Norwegian Kroners (2.4 mn USD) towards Covid relief in India amid the covid crisis. The support was used to scale up ambulance services, blood donation services, and medical helplines. Here is the full interview:

WION: How did Norway reach out to India amid the Covid crisis and how are both the countries cooperating?
Hans Jacob Frydenlund: Both Norway and India have been quite hard hit by the pandemic; it has hit globally. India and Norway have an important role when it comes to combating the pandemic. India has an important role as a vaccine producer and Norway consistently for more than 20 years has been working to provide and distribute vaccines to developing countries through the GAVI cooperation, also COVAX which is providing vaccines through multilateral channels.

We actually have a co-chairship in the accelerating activities against Covid. Those are some of the backdrops. When second wave hit because then we already, from our side, from the embassy's side reallocated funds from other health programmes like the mother health programme to the covid crisis. We also reallocated resources from other programmes and additional resources from Norway to the tune of 8 million Kroners. Also, Norweigan businesses took up the challenge, felt the need to show solidarity and presence where they had activity, and provided about 12 million Kroners in contributions. That is part of the picture. When it comes to COVAX, we have committed five million doses and 141 million dollars, that is the total. That is back of the backdrop, two countries having an important role in combating the pandemic.

WION: Can Indians go to Norway right now?
Hans Jacob Frydenlund: To be quite frank, just now, it is very difficult. Norway has been very strict in allowing travellers, not just for foreigners but also for us. We have restrictions on going back and forth. We have a plan to lift that, and you may access if you have family, relations and now we prepared for students who are supposed to start in universities this Autumn. We hope we can remove restrictions as soon as possible, but for time being it is quite regulated. That is a problem because Indians are the biggest work immigrant group in Norway outside the EU and those are very important in Norwegian high-tech industries. We have a highly competent workforce from India helping us develop our economy which we are very grateful.

WION: What is the India Norway green cooperation and how is your country taking a lead on dealing with climate change?
Hans Jacob Frydenlund: In spite of the pandemic, we have been able to enhance our cooperation with India. In October last year, we were able to hold a government meeting — joint commission digitally going through a huge area of the field of cooperation. The minister of external affairs summed it up in a very nice way: our partnership is green clean and human-centric. That brings us our priorities in that respect: ocean, climate, and energy. When it comes to energy, it is hydroelectric power, wind power, and the Norweigan investment fund for developing countries just invested 100 million dollars in rooftop solar in India.

What we, in the embassy, are focusing on is hydrogen, since this is a very rapidly developing field that is very promising and Norway has a century-old tradition in the production and know-how. India has defined hydrogen as one of the areas that they will get priority to provide clean energy. For instance, Norwegian company Greenstat and India's Indian Oil are establishing center for excellence for Hydrogen and we are going to have an international climate summit linked to hydrogen in September organised by PHDCC. So, we have clear emphasis on green, clean and renewable energy. There is huge potential in that area and our priority number one is oceans.

WION: India will host a maritime meet at the United Nations Security Council with PM Modi addressing it.
Hans Jacob Frydenlund: We really appreciate that India took the initiative during its presidency to put emphasis on maritime security. So this is a theme that deserved to be discussed and we hope there will be a result which we can use as a building block to improve maritime security in all its aspects. In that process, we are discussing what we can do with MEA, the Ministry of shipping. We have not been on it security-wise as a direct economic part of it. The blue economy and we were able to have a task force on blue economy meet in June. We were actually able to further our projects on cooperating on integrated oceans management which means how you actually, wisely use your blue resources. We have been pushing when it comes to plastics and ship recycling for which India has a huge capacity and Norway has a huge fleet that needs to be recycled, and needs to be done in a sustainable and green manner. Research is an important part of cooperation — ocean and arctic research where we have very close relations.

WION: What is your government's view about China?
Hans Jacob Frydenlund: Noway is a country far away from India and China. The big picture is that you have the growing importance of both China and India, the point of gravity in international politics is moving eastwards. This can be challenging with stronger and more assertive China and it can also create opportunities. To develop those opportunities, it is one of the reasons the Norweigan government in 2019 developed an India strategy because India is becoming more important for Norway. Since we need to actually relate more to India and that is my task, my mandate is to implement that strategy for improved relations and improved cooperation in areas I have mentioned —oceans, climate, energy — but also to rule of law, democracy. In this respect, our cooperation in security council is very important and we really appreciate it.