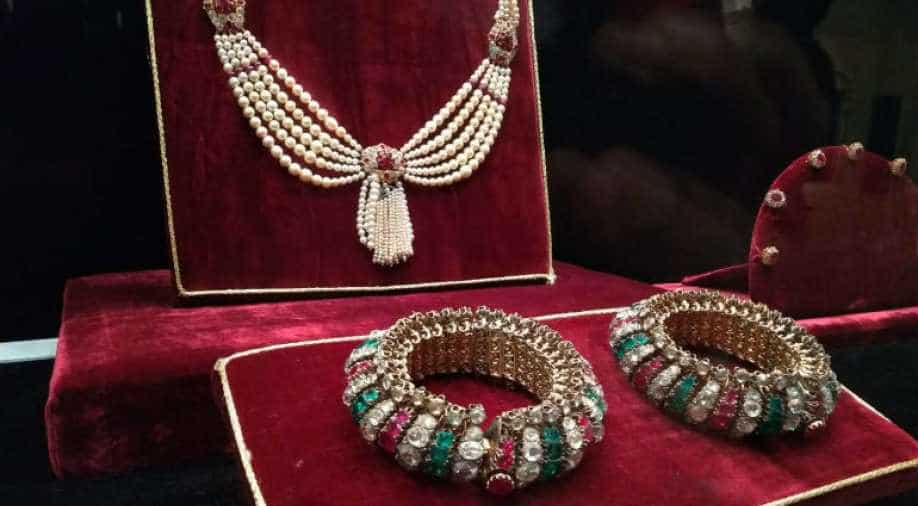 Some of the jewels kept at the National Museum in Delhi. Photograph:( WION )

The museum's security personnel said that people often asked them if the jewels were real or not.

Even as the Kohinoor continues to capture India's imagination, a diamond almost double of its size adorns a gallery at the National Museum in New Delhi.

The Jacob diamond, considered the world's fifth largest, is the main attraction of the 'Jewels of India - The Nizam's Jewellery Collection' exhibition.

Mined in South Africa in the 19th century, it was named after its seller Alexander Jacob.

More than 200 years later, it continues to shine like a newly cut stone.

Yet, the most unique thing about the Jacob diamond would be that it was used as a paperweight by the last Nizam - Mir Osman Ali Khan - who was once considered the world's richest man.

The 173 items of jewellery at the museum introduce visitors to one of the wealthiest Indian royal families.

The collection that is owned by the government has been kept at the Reserve Bank of India.

It has come to the National Museum after nearly 12 years. The jewels were earlier displayed here in 2001 and 2007.

"Spectacular, hypnotic, mesmerising," said Tories Pass, a tourist from the US who had come to look at the collection. "For me owning any one of these jewels would be a treasure," she added.

Gagan Anand, Pass' guide, said that the exhibition was a good way to change Westerners' notion about India being a poor country.

While most visitors remained awestruck, some raised doubts.

The museum's security personnel said that people often asked them if the jewels were real or not.

After all, the display of rare gems like emerald, ruby, sapphire, diamond and pearls almost seemed inauthentic.

The jewels were passed on from one to Nizam to another over the decades. The last of the Hyderabad state's ruler had inherited ninety per cent of the jewels from his predecessors.

Nizam was the title given to the monarch of the Asaf Jahi dynasty which ruled the present day state of Telangana, and parts of Karnataka and Maharashtra from 1724 to 1948.

Even as the jewels enthralled visitors, the National Museum staff said that the collection received more footfalls during its previous displays.

Mamta Mishra, a museum employee said, "Maybe fewer people turned up because unlike the last times, the exhibition was taking place during summers."

However, Mishra said that over 500 people visit the exhibition daily.

For most visitors, the collection symbolised national pride and not superfluous spending by royal families.

"It's our national treasure," said Manju Chugh, a visitor.

Few people know that this treasure would have been lost to foreign bidders had there not been a timely intervention by the Government of India.

The Indian government fought a lengthy legal battle to prevent the jewels from going under the hammer.

But the auction had disappointed Nizam's heirs who felt that the jewels had been undervalued.

Some estimates suggested that the collection was worth a staggering Rs 2,500 crore.

Unbeknownst to the controversy, museum-goers continue to cherish the exhibition.

Facebook, Delhi police and Mumbai police save a 'suicidal man'