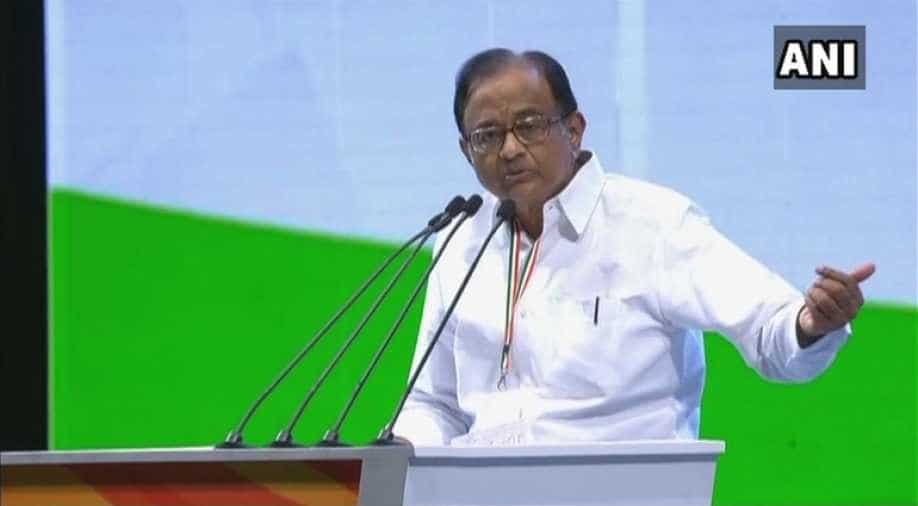 Congress leader P Chidambaram retaliated to the BJP's potshots over the charge sheets filed against him and his family.

"The buzz in Delhi is that Ms Nirmala Sitaraman will be removed as Defence Minister and appointed as lawyer of the Income-tax department. Welcome to the bar, Ms Sitaraman," wrote Chidambaram on Twitter.

BJP leader and defence minister Nirmala Sitharaman had sarcastically remarked that this was the Congress party's "Nawaz Sharif moment".

"The parallels cannot be missed out in this case. I am wondering if for Congress party in India, we are seeing the Nawaz Sharif moment," Nirmala Sitharaman had told the press.

The Defence Minister was referring to the Pakistan Supreme Court's decision to disqualify former prime minister Nawaz Sharif from holding office because of non-disclosure of assets and income earned abroad.

BJP president Amit Shah also launched an attack on the Congress and cited the four charge sheets filed by the Income Tax department against Chidambaram's family members to allege they had illegal assets worth 3 billion dollars, a claim dismissed by Chidambaram as a dream of the chief of "India's richest political party".

"This explains why despite Supreme Court's orders Sonia Gandhi, former PM Dr Manmohan Singh & then FM P Chidambaram dragged their feet on the formation of SIT, one of the first decisions taken by Modi govt, to fight black money! How could they indict their own selves," Amit Shah tweeted.

Chidambaram retorted to Amit Shah's charge in a tweet, urging the BJP to bring back black money stashed abroad -- as promised by the party before the 2014 Lok Sabha polls.

"The president of the richest political party in India is dreaming of billions of dollars! Bring the money back and put Rs 15 lakh in the account of every Indian as you promised," he said.

The Income Tax department on May 11 filed charge sheets against Chidambaram's wife Nalini, son Karti, daughter-in-law Srinidhi and a firm under the Black Money Act for allegedly not disclosing their foreign assets.

"The Congress party president, incidentally who is also out on bail on some financial transactions which are questionable, should certainly comment and tell the entire party and people of India whether he is going to investigate this," she said.

She pointed out that the Pakistan Supreme Court had disqualified Sharif from holding office because of not disclosing assets held in foreign countries.

Sitharaman said the law on black money was brought in by PM Modi's government because it had pledged to fight black money held in India and abroad before the last Lok Sabha elections.

The chargesheets or prosecution complaints have been filed by the IT department before a special court in Chennai under Section 50 of the Black Money (Undisclosed Foreign Income and Assets) and Imposition of Tax Act, 2015, officials had said.

Nalini Chidambaram, Karti and Srinidhi and a firm linked to Karti have been accused of not disclosing, either partly or fully, immovable assets such as one at Barton, Cambridge, UK, worth Rs 5.37 crore, property worth Rs 80 lakh in the same country and assets worth Rs 3.28 crore in the US.

The family of the former finance minister had said the Income Tax Department (ITD) charge sheets against them under the black money law were "baseless allegations" as the overseas investments under question had been reflected in their IT returns.