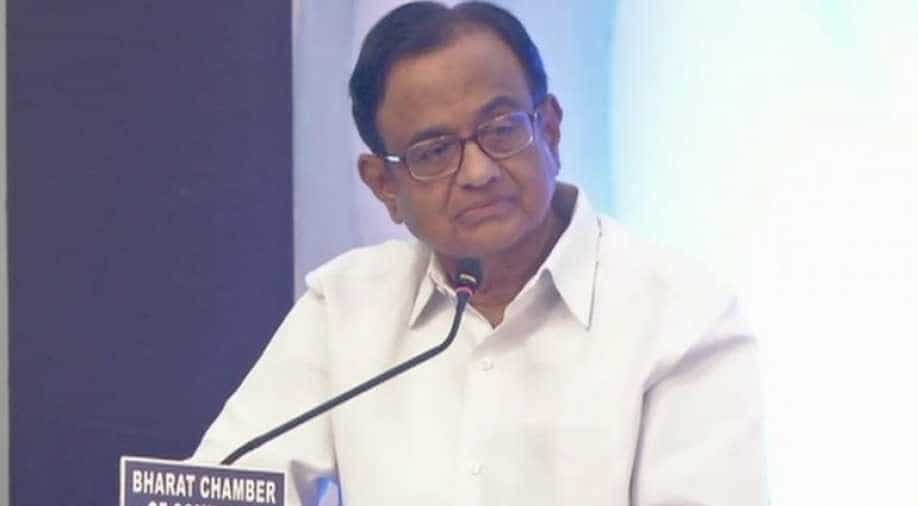 The former finance minister said that the National Health Protection Scheme which stated that 50 crore people would be covered up to Rs 5 lakhs per person was one such example of the false promise made by the government to the people.

"They have announced some great jumlas, one of them is 'National Health Protection Bill'. 10 crore families, 50 crores people will be covered up to 5 lakhs each. How much is the extra money provided? - Zero," said Chidambaram at an event in Kolkata.

The Congress leader also took on the government for not recovering the money that had been swindled by fugitive businessman Lalit Modi and billionaire jewellery designer Nirav Modi.

He accused the government of being aware of a hidden source of income which nobody knew about.

"Where is the money? Finance Minister said I will find money. You can find money only by raising taxes. Or is there some hidden source of income we don't know about? Are the Lalit Modis & Nirav Modis promised you money?," said Chidambaram.

The Congress spoke about the need for an "alternative approach" to the problem in Kashmir, stating that there were security forces everywhere in the state which was not a solution. In a reference to PM Modi's boast of a "56-inch chaati (chest) during his 2014 poll campaign,  the Congress leader said the the "56 chaati" muscular approach, had worsened things.He also spoke about the need to reduce the paramilitary force in the state.

"We have to look for an alternative approach. After every 10 feet in Kashmir, there are security forces.That's not the way to solve Kashmir problem. When I was Home Minister & Omar Abdullah was CM, we did reduce presence of paramilitary by 10,000 troops," P Chidambaram said.

"Graph of violence in Jammu and Kashmir came down from 2010-14, and in 1st year of their government also. Only when they started adopting macho, muscular '56 chaati' approach, things turned to worst. We must entrust law and order to the Jammu and Kashmir Police, reduce presence of paramilitary and talk to the people."

P Chidambaram said it is time to amend the Armed Forces Special (Powers) Act now in force in Jammu and Kashmir.

"There is a need to amend the AFSPA if you cannot repeal it. The law and order should be entrusted to the Jammu and Kashmir police and not on the paramilitary forces," he said.