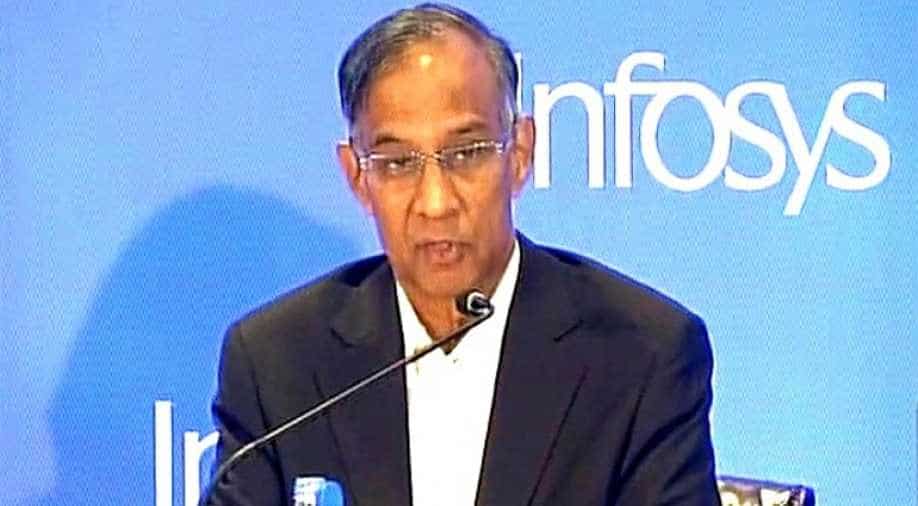 Former Infosys chairman R Seshasayee today criticised former Infosys founder NR Narayana Murthy for making "false and slanderous accusations" against him, and said he was unable to understand the motivation for the persistent vendetta.

"Since my resignation from the board of Infosys, I have kept away from making any public statements, despite provocations, since I sincerely want the company to move forward, and not be bogged down with the issues of the past," he said.

He added that he was forced to issue a statement after Murthy's "personal attack and patently false and slanderous accusations" at an investor call earlier this week.

Days after installing Nilekani, Murthy had on said on Friday that his concerns with the Seshasayee-led Board were poor governance and ex-CFO Rajiv Bansal being paid large severance as 'hush-money'.

Responding to the allegations, Seshasayee said, "It is regrettable that Murthy's campaign on the alleged governance lapses has continually slipped into personal attacks and slander on individual board members. He added that he had joined Infosys at the invitation of Murthy, who in February this year issued a press statement to say that "I was a man of high integrity."

"I am therefore at a loss to understand the motivations for this persistent vendetta against me," he said.

In the investor call, Murthy had said that Seshasayee had on October 14 told him that the board agreed to pay Bansal large sums of money as it "felt generous".

"To quote an anonymous whistle blower letter that alleged many things, which have subsequently been proved baseless and false through multiple investigations by highly respected counsel, in order to give an impression to the audience that I lied to the shareholders, is patently offensive," he said.

The former Infosys chairman claimed that words that Murthy attributes to independent directors Jeffrey Lehman and Roopa Kudva from their private conversation with him are also "egregiously taken out of context".

Murthy had said that he was told by Lehman that the reasons for payment to Bansal were confidential while Kudva asked him to sign a non-disclosure agreement if he wanted to know the reasons. Lehman, a former of director of Infosys also resigned recently.

In his statement, Seshasayee quotes Lehman as saying that Murthy should stop quoting "lies" floated in the anonymous letter on ex-CFO compensation and alleged irregularities in USD 200 million acquisition of Israeli firm Panaya.

Seshasayee said Murthy's statement to the investors "misleadingly attributes words" to him, words taken "completely out of context" to make it appear that he had lied.

He said during his tenure, Seshasayee was "scrupulously and tirelessly devoted to ensuring that the Board comply with all applicable principles of law and governance."

"An anonymous, so-called 'whistle blower' made outrageous charges against management; the Board engaged several sets of outside counsel and investigators of impeccable reputation, and those investigators determined that every charge was false and without any foundation," he said.

The statement also quoted John Etchemendy, another former Director of Infosys who also resigned recently from the Board, to say that Seshasayee is "a man of impeccable integrity. Faced with unfair, false, and outrageous attacks, he has consistently responded with scrupulous honesty and forthrightness."

He said he was "fully conversant with the details of the Rajiv Bansal issue" and can categorically state that at no point did Seshasayee say "anything in public or, to the best of my knowledge, in private that was untrue or did not reflect the collective view of the Board."