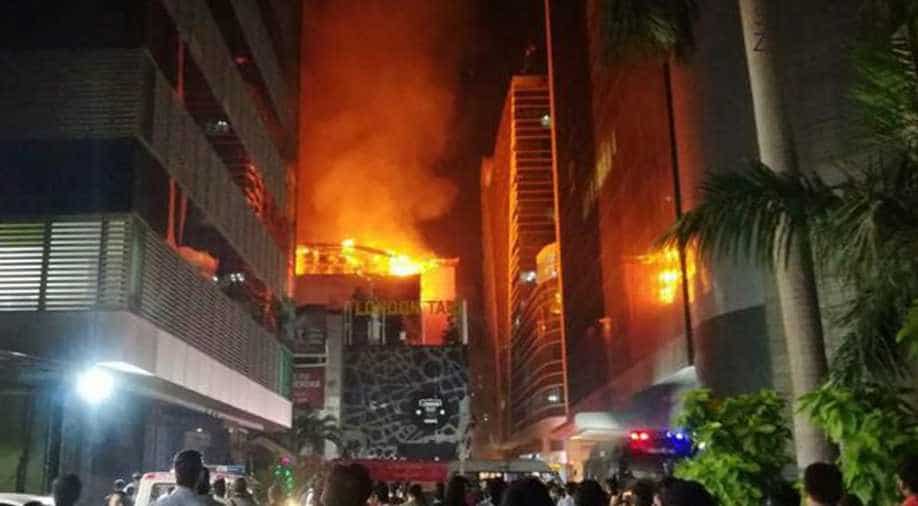 Fourteen people died in the fire, most of them at the roof-top '1 Above' pub next to Mojo's Bistro, on December 29 Photograph:( ANI )

The inquiry report by the Mumbai municipal commissioner on the deadly fire at Kamla Mills compound here has confirmed the theory that flying embers from hookah served illegally at Mojo's Bistro was the trigger.

Fourteen persons died, most of them at the roof-top `1 Above' pub next to Mojo's Bistro, in the fire on December 29.

The report submitted by municipal commissioner Ajoy Mehta has found that the blaze started due to flying charcoal embers from hookah, served illegally in Mojo's Bistro. It also proposed criminal action against the owner of the premises, owners of both the restaurants and concerned architects and interior decorators.

A day after the fire, Maharashtra Chief Minister Devendra Fadnavis had asked Mehta to conduct an inquiry.

A preliminary report by the Mumbai fire brigade had suggested that flying embers from hookah at Mojo's Bistro may have started the fire.

"The cause of fire was fire starting from the flying embers from the hookah being illegally served in Mojo's Bistro restaurant which had partially unauthorisedly covered their terrace and used all kinds of combustible material for the construction of the same," Mehta's report said.

The "very flammable material" used to cover the terrace of 1 Above pub then caught fire immediately from its common wall with Mojo's Bistro, and spread rapidly, it said.

Its terrace too had been covered without permission, the report said.

The owner of the premises who gave permission for unauthorised use of terrace areas to these two restaurants was equally responsible for the fire and deaths, the report said.

"It is therefore proposed to initiate criminal action against owner of the premises, owners of the restaurants, the architect and the interior decorator who carried out...These unauthorised works and illegal activities," the report said.

The 98-page report sought amendments to the Mumbai Municipal Corporation Act to make punishment for such lapses by restaurants or eatiers more stringent.

Every owner/occupier of commercial premises must appoint a `fire safety officer' trained in matters related to fire safety, and his or her name and contact details must be shared with the city's Chief Fire Officer, the report said.

Police have already arrested owners of both the restaurants in the case.