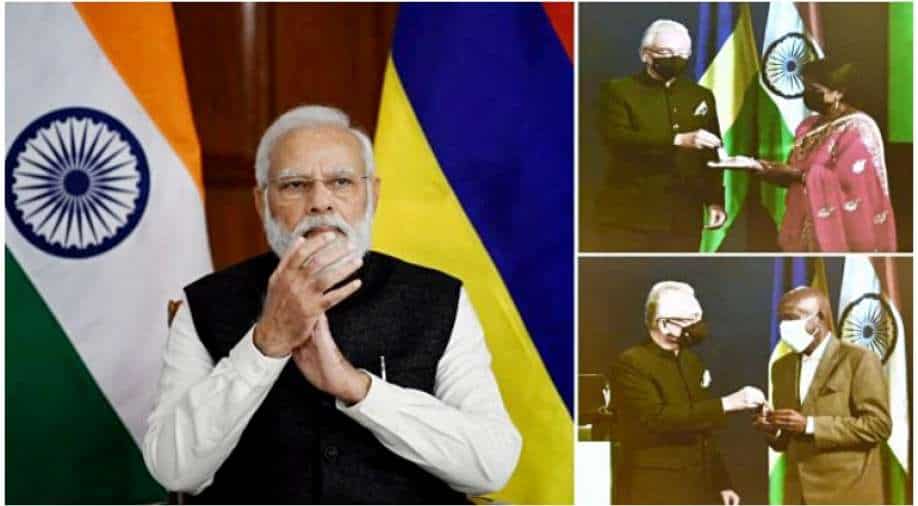 The ceremony included exchange of two key bilateral pacts -- an agreement for the extension of USD 190M Line of Credit from the Indian to the Mauritian government for the Metro Express and other infrastructure projects, and an MoU on the implementation of small development projects

Cooperation between India and Mauritius, including in maritime security, has translated the vision of SAGAR - Security and Growth for All in the Region - into action, Prime Minister Narendra Modi said on Thursday.

Modi also said Mauritius is a prime example of India's approach to development partnership which is based on the needs and priorities of its partners and respects their sovereignty.

He made these remarks after he and his Mauritian counterpart Pravind Jugnauth jointly inaugurated India-assisted social housing units project in Mauritius virtually.

The ceremony included exchange of two key bilateral pacts -- an agreement for the extension of USD 190M Line of Credit from the Indian to the Mauritian government for the Metro Express and other infrastructure projects, and an MoU on the implementation of small development projects.

In his remarks, Modi said Mauritius is also integral to India's approach to the Indian Ocean and recalled that it was in the island nation, during his 2015 visit, that he had outlined India's maritime cooperation vision of SAGAR - 'Security and Growth for All in the Region'.

"I am glad that our bilateral cooperation, including in maritime security, has translated this vision into action," he said.

Jagnauth, during his address, broke into chaste Hindi several times and thanked India and its government for the development assistance it has been providing.

The Mauritian prime minister said that as gratitude for India's support to the metro express project, his government has decided to name one of the major metro stations as 'Mahatma Gandhi' station.

Modi underlined that India and Mauritius are united by history, ancestry, culture, language and the shared waters of the Indian Ocean.

"Today, our robust development partnership has emerged as a key pillar of our close ties," he said.

Recalling the inauguration of the metro express project, the New ENT Hospital and the New Supreme Court building in Mauritius, Modi said he was delighted to know about the Metro's popularity, crossing the 5.6 million passengers mark.

"We look forward to supporting the further extension of the Metro, under the 190 million dollar Line of Credit agreement exchanged today. It is also a matter of satisfaction and pride for us that the New ENT Hospital has been instrumental in combating COVID-19," he said.

Noting that India-Mauritius cooperation during the Covid pandemic has been exemplary, he pointed out that under India's Vaccine Maitri programme, Mauritius was one of the first countries it was able to send Covid vaccines to.

"I am happy that today Mauritius is among the few countries in the world to have fully vaccinated three-fourths of its population," Modi said.
He asserted that Thursday's event again demonstrates the shared commitment to improving the lives of the people of the two countries.

"Pravind ji, I am happy to join you on the completion of the Social Housing project. We are particularly glad to be associated with this important effort to provide affordable houses to the common people of Mauritius," Modi said.

"We are also initiating today two other projects that are critical to nation-building: a state-of-the-art Civil Service College that will help in skilling government officers, for Mauritius's continued progress; and the 8 Mega Watt Solar PV Farm project, which will help mitigate the climate challenges that Mauritius faces as an island country," he said.

In India too, we are focusing on innovative approaches to civil-service capacity building under our Mission Karmyogi, Modi highlighted.

"As we launch the 8 Mega Watt Solar PV Farm, I recall the One Sun One World One Grid initiative, which was launched on the sidelines of the COP-26 meeting in Glasgow last year," he said.

"It is an idea that I had put forth at the First Assembly of the International Solar Alliance in October 2018. This initiative will not only reduce carbon footprints and energy costs, but also open a new avenue for cooperation between different countries and regions," Modi said.

"I hope that India and Mauritius can together create a shining example of such cooperation in solar energy," he added.

"In the coming days, we will begin work on several important projects such as the Renal Transplant unit, the Forensic Science Laboratory, the National Library & Archives, the Mauritius Police Academy, and many others," he said. 'd like to reiterate today that India will always continue to stand by Mauritius in its development journey," Modi added.

He also recalled the stellar contribution of the late (former Mauritian PM) Anerood Jugnauth to strengthen India-Mauritius ties.
He was a visionary leader widely respected in India, the PM said.

"Upon his passing, we had declared a day of national mourning in India, and our Parliament had also paid homage to him. It was our privilege to honour him with the Padma Vibhushan award in 2020," Modi said.

In a tweet, External Affairs Minister S Jaishankar said the delivery of Indian projects abroad has radically improved and Mauritius is a good example. "After the Metro Express, ENT Hospital and Supreme Court, this Social Housing Project is the proof of change."