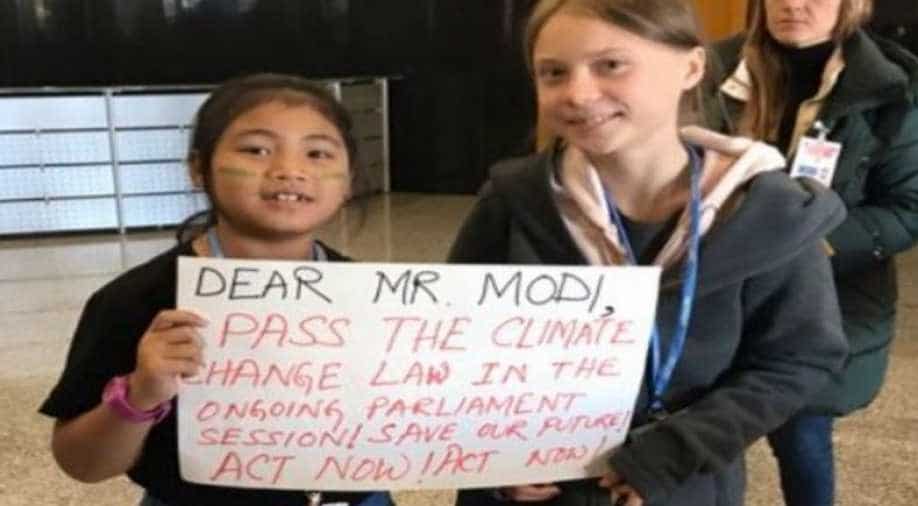 Licypriya is not the only one to be facing the “identity” crisis here. Ugandan climate change activist Vanessa Nakate slammed US media of “racism” after she was cropped out of a photograph taken with other activists in Davos.

With increasing attention to Greta’s heroics on climate change, a young activist from around the world feels they are being overshadowed by Greta Thunberg.

Licypriya Kangujam, 8-year old climate change activist took to twitter urging “media” to not call her “Greta of India”.  “If you call me “Greta of India”, you are not covering my story. You are deleting a story,” she said in a series of tweets on Monday. She went on saying that she and Greta share a common goal but different identities.

Licypriya hails from Bashikhong in Manipur and has been recognized as one of the youngest climate change activists from around the world. She was one of the youngest speakers at the 2019 United Nations Framework Convention on Climate Change held in Madrid last year. She has been invited to 16 countries as part of her movement. She recently was awarded the prestigious "World Children Peace Prize 2019" from Global Peace Index - Institute for Economics & Peace (IEP), in the Maldives.

It may be true that people called me @GretaThunberg of India, but truly, I am “Licypriya Kangujam of India 🇮🇳”. pic.twitter.com/p0LewsHQ4n

Soon after her activism grabbed attention on climate change, she was instantly compared with Swedish Climate Change activist Greta Thunberg and was coined “Greta of India”. Licypriya in a series of tweets on Monday explained why she doesn’t like being compared to Greta though she remains her inspiration. She said, “We have a common goal, but I have my own identity, story. I began my movement in July 2018 even before Greta started.”

Ready for the first day to new school after dropped out for 304 days due to active #ClimateChange movement across the globe. My new journey will strengthen the #ChildMovement #SchoolStrikeForClimate every Friday. Pray for me! pic.twitter.com/ONxtVt4JuJ

Licypriya is not the only one to be facing the “identity” crisis here. Ugandan climate change activist Vanessa Nakate slammed US media of “racism” after she was cropped out of a photograph taken with other activists in Davos. Vanessa took to Twitter to express her anger and disappointment with the cropped photo and went on saying how for the first time in her life she “understood the definition of the word racism”.

Dear Media,
Stop calling me “Greta of India”. I am not doing my activism to looks like Greta Thunberg. Yes, she is one of our Inspiration & great influencer. We have common goal but I have my own identity, story. I began my movement since July 2018 even before Greta was started. pic.twitter.com/3UEqCVWYM8

The photograph was taken at a youth climate science event, during the recently held World Economic Forum, January 26. Multiple news outlets from the US including news agency AP cropped out Nakate from the picture which featured the “Friday 5” representatives including Greta Thunberg, Loukina Tille, Luisa Neubauer, and Isabelle Axelson. Ms Nakate accused her of being cropped out as an act of “racism” in an emotional video on Twitter.

Even Thunberg was quick to criticize the act with her post on Instagram saying, “This Friday 5 representatives from Fridays For Future held a press conference in Davos. A news agency chose to edit the picture like above, cutting out @vanessanakate1 from the picture. This is unacceptable in so many ways. Like Vanessa said herself: “You didn't just erase a photo. You erased a Continent.”

Following huge criticism and cries of outrage from supporters on social media, the AP replaced the cropped photo with its original, claiming “no ill intent”. The U.S. based news agency in a tweet said, “It was a mistake that we realise silenced your voice, and we apologise. We will all work hard to learn from this. @AP executive editor apologizes to African climate activist for photo crop that removed her from the image where she posed with other activists”, to which Vanessa replied to their tweet saying, “Anyway my name is Vanessa Nakate. Thought I would add that.” Vanessa’s reply came in after the news agency referred to her as “African climate change activist” instead of naming her.

Incidents related to Licypriya and Vanessa are not isolated ones, it represents a part of the larger trend wherein we tend to find a “face” or “hero” for a cause. When we talk about climate change it is the heroics of Greta Thunberg which overshadows the efforts of other young activists. Even Greta addressed the issue saying, “There are countless school strikers and young climate activists around the world. Not just me. They all have names and stories waiting to be told.”