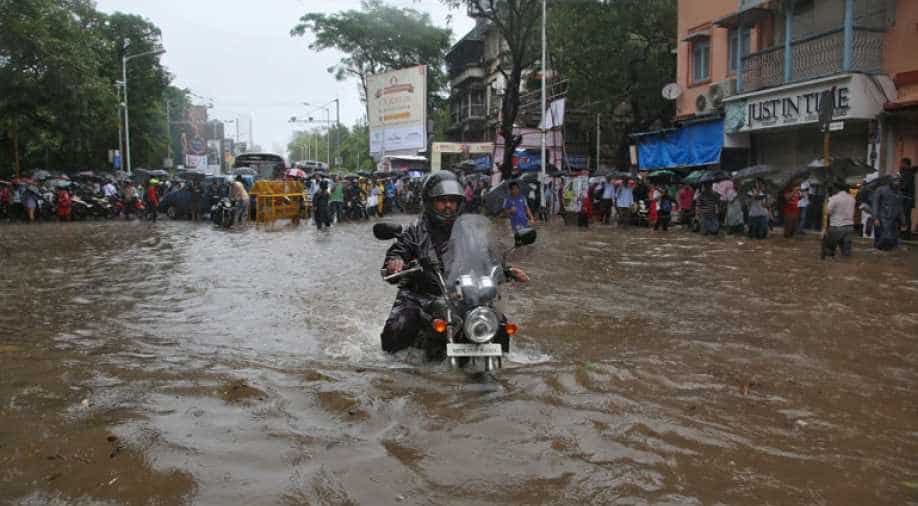 A man rides his motorbike through a water-logged road during rains in Mumbai on August 29. Photograph:( Reuters )

Three hours of the downpour equivalent to an entire day's rain, submerged most of India's financial capital by noon

Mumbai faced its worst rain crisis since 2005 on Tuesday as the city was lashed by nine times the usual rain.

Three hours of shower (85 mm) was equivalent to an entire day's rain, submerging most of India's financial capital by noon.

The torrential rain disrupted road, rail and flight services, uprooted trees, swamped homes and brought life in the megapolis and its satellite towns to a grinding halt.

A 'Red' warning has been issued for the next 24 hours for the city and adjoining areas, indicating the possibility of very heavy rainfall, a top official of the India Meteorological Department said. He added that the city and surrounding areas would continue to receive heavy rainfall over the next 2-3 days.

Train services on all three suburban railway lines-- Central, Western and Harbour lines-- have been paralysed.

Suburban rail services, the lifeline of the metropolis, were thrown out of gear. Several trains are stuck in the station premises. Eleven trains have been rescheduled and seven trains cancelled till 7 pm today.

Fidgety passengers could be seen jumping off stationary trains and walking along the tracks to their destinations.

Thousands of vehicles were stranded on arterial roads in Lower Parel, Dadar, Kurla, Andheri, Khar West, Ghatkopar, Sion and Hindmata areas that were under knee to waist deep water for several hours, many having broken down.

Commuters were seen standing under knee deep water on the steps of buses in low lying areas like Parel.

Traffic crawled at snail's pace on important roads, including the Eastern and Western Express Highway, Sion-Panvel highway and LBS Marg.

Poor visibility caused delays in flights. While the main runway of the Chhatrapati Shivaji International Aiport (CSIA) is operational, the nearby aerodrome at Juhu has been shut as it is very close to the Arabian Sea, sources said.

Aircraft stopped landing at the city airport after 4 pm but were taking off, officials said.

Heart broken. Had to abandon the car. Water flooding. @RidlrMUM #MumbaiRains ???? Tears flowed as much as the rain, as I left pic.twitter.com/1Kb0ETsQCC

The weather office forecasts predict that the downpour could continue for as long as 48 hours.

The authorities have advised residents to stay in or go home early "unless urgent".

If you are still at work, don't panic and leave. A little delay & planned travel may help you better #CheckRoutes #MumbaiRains

Centre assures all possible support to the Government of Maharashtra in mitigating the situation due to heavy rains in parts of the state.

With high tide putting pressure on the worn-out drainage system, preventing the drainage of water into the sea, experts foresee that the situation will worsen.

The National Disaster Response Force has been alerted to handle the ongoing crisis.

Five flood rescue teams and two diving teams are also ready to render assistance at different locations across Mumbai, a spokesperson for the navy said.

Naval helicopters have been kept on standby to meet any eventuality and flood rescue teams and divers are also ready for deployment.

The Brihanmumbai Municipal Corporation (BMC) helpline number for emergencies is 1916.

In an official announcement, the Maharashtra government instructed offices to allow employees to leave early.

Locals have turned to social media to explain the intensity of the situation.

People spread the word about the critically affected areas that must be avoided.

BMC helpline 1916. Police Helpline 100..Home is the safest.. for most. Find shelter and give shelter.
Be_Safe_Mumbaikars

People have been asked to stay away from beach areas. The rain will act as a hindrance in completing the immersion ritual of Ganesha idols, the closing ceremony of the famous 10-day-long Ganesha festival.

The sea-link between western suburbs and south Mumbai has been flooded. As the major bridge gets blocked commuters will have to wait to travel to the other side of the city.

Mumbai, south Gujarat, Konkan, Goa and west Vidarbha will get extremely heavy rainfall in the next 24 to 48 hours, the head of a climate monitoring centre warned.

"It is a serious situation. We have issued necessary warnings to the departments concerned, including airports," A K Srivastav, head of climate monitoring and analysis at IMD Pune, told PTI.

"The status of the weather system, which has brought heavy showers over the Mumbai region, has been upgraded from 'well marked low pressure' to 'depression'. It means it is set to bring more rains. Hence, we have predicted an extremely heavy rainfall," he said.

More than 500 deaths were caused as a result of the floods in 2005, with the major number of deaths in slums-- home to the majority of Mumbai's population.

Indian meteorological department predicts more rain in Mumbai in the next 48 hours. (WION)