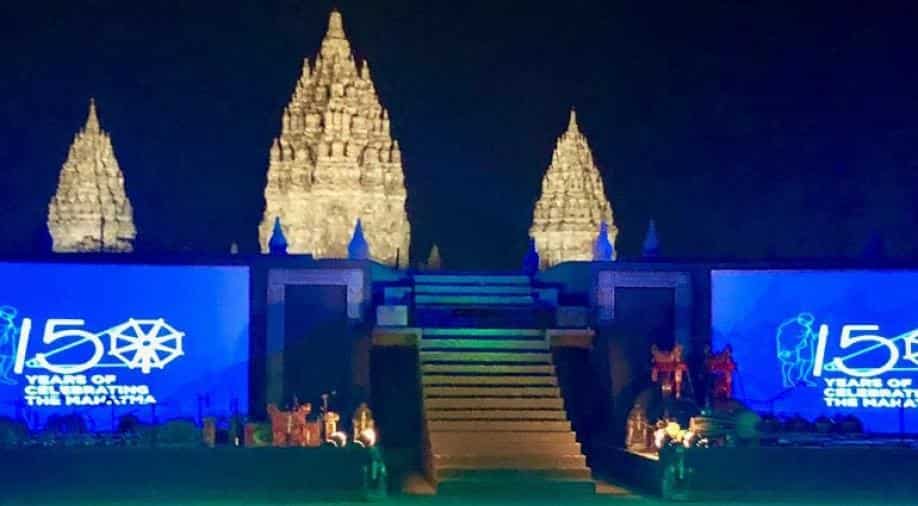 A building lit up on the occasion of Gandhi Jayanti. Photograph:( ANI )

More than 120 locations executed the LED projection, including iconic locations like Piccadilly Circus in London and Burj Khalifa in Dubai

Continuing the celebrations of Mahatma Gandhi's 150th birth anniversary, Missions abroad highlighted the relevance of Gandhi by projecting his message in the form of an LED video displayed on iconic buildings in several countries.

More than 120 locations executed the LED projection, including iconic locations like Piccadilly Circus in London, Burj Khalifa in Dubai, Welt Museum in Vienna, Buda Castle in Budapest, Palazzo Senatorio in Rome, Prambanan Temple in Indonesia, and Museo de Arte in Peru, among others, in the evening of October 2.

The film consisted of key moments taken from Gandhi's life- his quotes, everyday sayings, discourses and initiatives- presented in a visual narrative using line-art style of hand drawn illustrations layered with water colour and ink wash that symbolised and represented the simplicity that was Gandhi's life and his teachings.

The illustrations seamlessly transition in a thread-like fashion, shaping different scenes, gave a visual meaning to the lesson or initiative showcased in the narrative.

To celebrate 150th birth anniversary of Mahatma Gandhi, Missions abroad will continue to highlight his relevance through projecting his message in the form of an LED video on iconic buildings or on other prominent locations. It'll be organised in evening of 2 Oct. #GandhiJayanti pic.twitter.com/Mb6dZRtyZV

In Nepal, the celebrations were commemorated with an LED projection depicting life events of Gandhi at the front facade of Rashtriya Sabha Griha, Bhrikuti Mandap, where the Kathmandu Metropolitan City had hosted a Civic Reception for Prime Minister Narendra Modi during his state visit to Nepal in May this year.

The LED projection here included slides of important life events of Gandhi, depicting the philosophy of non-violence and inclusive society.

The event was inaugurated by Acting Prime Minister and Defence Minister of Nepal, Ishwar Pokhrel, in the presence of India's Ambassador to Nepal, Manjeev Singh Puri, and other eminent individuals.