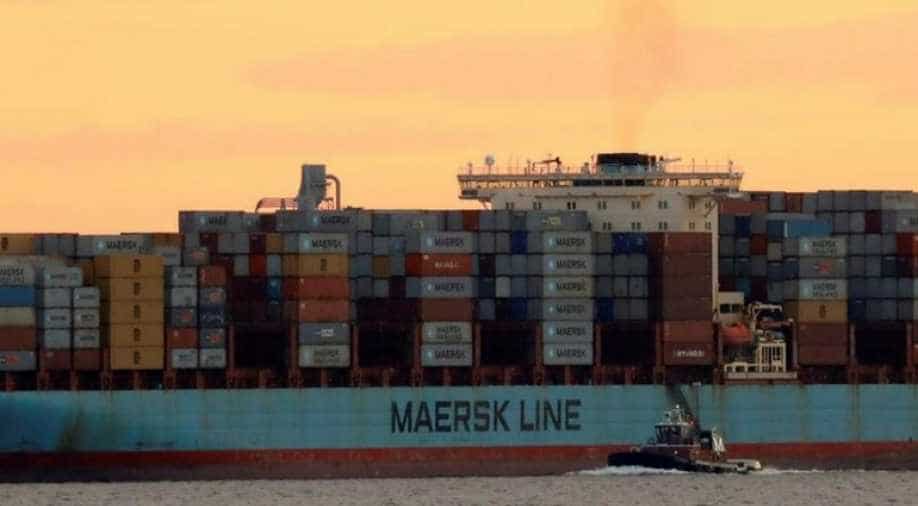 The vessel reported an explosion and fire on board and requested immediate assistance. Photograph:( Reuters )

A Maersk container ship, with 27 crew members on board including 13 Indians, caught fire in the Arabian Sea near the Lakshadweep Islands last night, the Indian Coast Guard (ICG) said today.

While 23 crew members have been rescued, four have been reported to be missing, one of whom was an Indian. The Indian Navy has launched a rescue mission from Arakkonam, Tamil Nadu using Boeing P8 with a Search & Rescue kit (SAR kit) to find the missing crew members.

Casualties are feared in the disaster that struck on the high seas around 9.45 pm on Tuesday. The cause of the incident which occurred off the south-west coast of India, is not yet known, the official said.

The captain is also an Indian and the remaining crew are Philipino, British, Romanian and Thai. The crew had abandoned the ship as fire spread beyond their control.

The 330-metre-long Maersk Honam, which was en route to Suez from Singapore, caught fire last night with flames from the main deck of the ship rising up to its bridge (a height of about 25 metres), it said in a statement. The vessel reported an explosion and fire on board and requested immediate assistance.

The ship was at a distance of 570 km (340 nautical miles) from Agatti in the Lakshwadeep Islands. The Coast Guard has pressed into action its assets for the rescue operation, it said. “The ship had 27 crew members on board, of whom four are missing. Out of the 27 crew members, 13 are Indians including the captain of the ship,” the ICG said.

After getting information about the mishap, the Maritime Rescue Coordination Centre (MRCC) in Mumbai immediately alerted all the merchant ships near the location through the satellite-based communication network, the International Safety Net (ISN), ICG said.

The ICGS Shoor, patrolling near Lakshadweep Islands was diverted to assist the distressed vessel. ICGS Shoor is an Offshore patrol vessel with specialised fire fighting equipment on board.

“The search operations are on and the Coast Guard assets have been pressed into action,” said Inspector General K R Nautiyal, the commander of the Coast Guard West region. “It is our priority to save and rescue the four missing crew and also continue our efforts to salvage the vessel with the assistance of specialised vessels, which are being arranged,” he added.