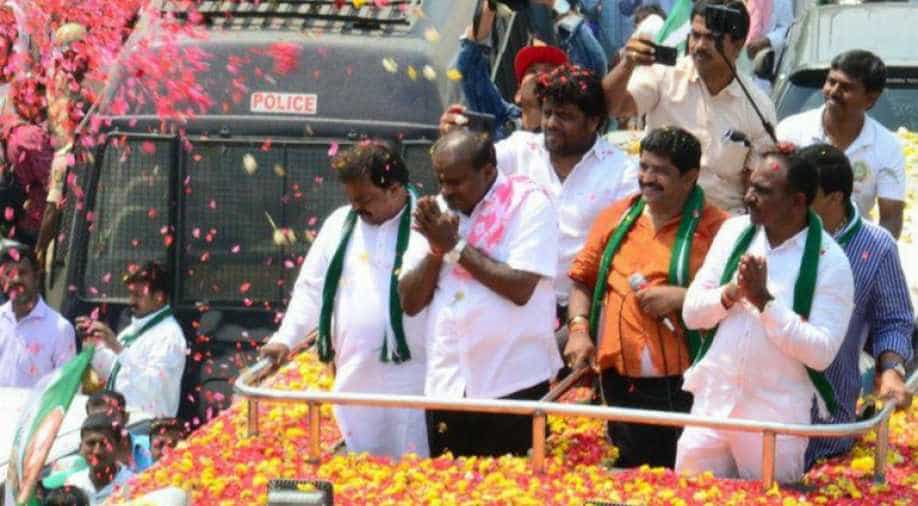 Having missed the taste of power for over a decade, former prime minister's son realised the importance of assuming power the tough way

The Congress and the JD(S), in a unanimous decision, have decided to name HD Kumaraswamy as the Chief Minister of Karnataka. The political powerplay in Karnataka took an interesting turn today when the BJP, despite, winning the most seats couldn't rise to power and Rahul Gandhi-led Congress didn't bat an eye in extending support to HD Deve Gowda's Janata Dal (Secular).

According to reports, Former Congress Chief Sonia Gandhi had a telephonic conversation with the JD(S) chief Deve Gowda to form an alliance. The Congress also offered the JD(S) to choose the Chief Ministerial of their choice, HD Kumaraswamy was handed over the baton.

JD(S) state chief and former Karnataka Chief Minister HD Kumaraswamy had previously conceded that the assembly polls are a "battle for survival" for the JD(S) the party had been out of power for nearly a decade.

Kumaraswamy's political journey began in the year 1996. He started by winning that year's Lok Sabha elections from Kanakapura seat. Kumaraswamy rose to power in 2004 when the state elections resulted in a hung assembly and the JD(S) joined hands with the Congress to form a government he later called off the alliance, formed a government and assumed office as the 18th Chief Minister of Karnataka in 2006.

In October 2007, Kumaraswamy stepped down in what the party described as a 'power-sharing pact' with the BJP. BS Yeddyurappa succeeded him in November 2007.

This time around, opinion polls predicted a hung assembly, but the scenario was slightly different. JD(S) could have been sidelined as a customary kingmaker again, instead, the Congress politely placed the ball in Deve Gowda's hand who crowned his prince Karnataka's king.

Away from the limelight, that always shone brightly on BJP's Yeddyurappa and Former Karnataka Chief Minister Siddaramaiah, Kumaraswamy wearily worked towards pulling his party out of the role of a mere kingmaker.

While campaigning for assembly polls this year, Kumaraswamy looked defiant and confident of emerging as a king. He is known to have tasted both the sides - when his party sided with the Congress to form a coalition and also when he gave it all away to the BJP in 2007.

But, having missed the taste of power for over a decade, former prime minister's son realised the importance of assuming power the tough way.

He was done with facilitating the political dreams of others and decided to steer his party on road to power.