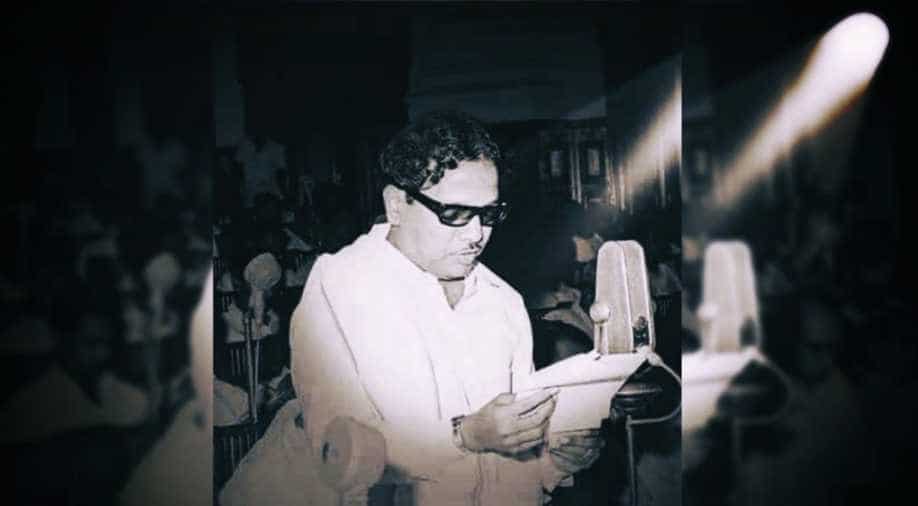 Tamil Nadu stands apart from every other state of India. Its politics, language, leaders, role models and the cultural footprint is far removed even from the other four south Indian states. This distinctiveness defines Tamil politics and former chief minister Karunanidhi was a fine example of it.

Karunanidhi joined politics at an early age. He was inspired by Annadurai and Periyar - two leaders who reshaped the political and social landscape of Tamil Nadu. He was deeply influenced by the rationalist movement that marked a great discontinuity in the long and unbroken traditional practices of the state.

Annadurai and Periyar strongly advocated abolishing superstitious practices, caste system, traditional form of worship and even traditional religion, and sought supremacy of rationality as well as distinctness of Tamil culture and language. They wanted to build a "modern" Tamil Nadu.

This movement galvanised the masses in Tamil Nadu. Traditional caste-based power structures were turned upside down. The movement also ended up impacting cinema which became a platform for cultural change. Popular film stars went on to become powerful politicians. Be it Karunanidhi, MGR or Jayalalithaa, all of them were associated with the film industry.

While MGR and Jaya were stars, Karunanidhi was the writer-poet-politician who inspired the masses through his writings and association with cinema. Tamil film stars and their fan clubs enjoyed more clout than political parties. The former DMK chief contributed in several vibrant films in the Tamil cinema such as Parasakthi, Manohara, and Malaikkallan.

Karunanidhi used Parasakthi to propagate the ideals of the Dravidian movement and penned dialogues that questioned the rationale behind belief and caste hegemonies.

It was due to his immensely powerful, rationalist dialogues he was given the term "Kalaignar" which means "artist" in Tamil.

Other than screenwriting, Karunanidhi also wrote poems, books,  stageplays as well as letters. He also had a thorough knowledge of Sangam literature, one of the oldest languages in which the early history of Tamil Nadu is written.

His most famous books include Sanga Thamizh, Thirukkural Urai, Ponnar Sankar, Romapuri Pandian, Thenpandi Singam. In 1989, when he was the chief minister Karunanidhi penned the screenplay for Niyaya Tharasu.

In most of his films, he wrote politically inclined dialogues which had a strong message. Whenever a star went on to become a politician, the club acted as the vehicle on which their campaign was organised. It is for this reason that both Rajinikanth and Kamal Hassan are being watched as the possible next generation of star politicians.

Karunanidhi also led another cultural revolution in Tamil Nadu. He harnessed the "anti-Hindi struggle" to the DMK's advantage. In fact, the struggle against Hindi went on to become a hallmark of DMK's politics against Congress. When MGR went on to become the CM, he too held on to the same position on the Tamil language.

DMK and subsequently the AIADMK pushed for a politics which was rooted in Tamil pride. Karunanidhi was uncompromising on this issue. He staunchly believed that no other language could be imposed on the Tamil people. This distinctiveness even had its impact on Tamil eating habits. Tamil Nadu continues to retain strong backward caste, anti-brahmanical politics.

Though distinct from the politics of North India, the cultural politics of Tamil Nadu did impact the government in New Delhi and the Indian worldview.

It, in fact, left a deep impact on India's foreign policy. The war being waged by the liberation Tigers of Tamil Eelam(LTTE) in Sri Lanka remained a strong political issue in the state. The central government had to take a neutral stand on the issue.

Clearly, Chennai and Delhi remained two different worlds, and nobody symbolised it as resolutely as Karunanidhi.