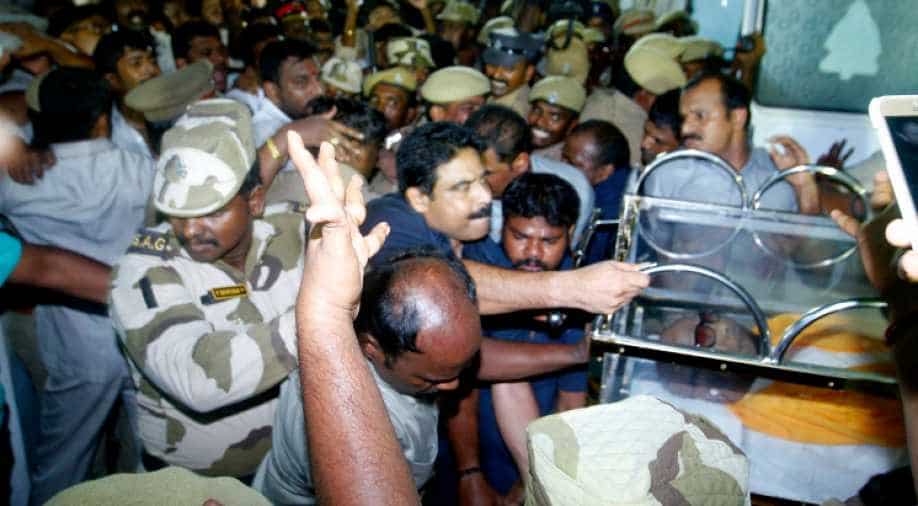 AIADMK had earlier rejected DMK's demand to allow Karunanidhi to be buried at Marina beach.

The case was adjourned till 8am on Wednesday.

Doraisamy, advocate who had filed a petition against burial on Marina told reporters: "I withdraw all cases in this regard because Kalaignar Karunanidhi is important for us. So now, there are no legal hurdles for the government."

However, the DMK wasn't satisfied with the state government's explanation and appealed to the High Court. Senior counsel for DMK P Wilson and Saravanan went to acting Chief Justice of the Madras High Court Huluvadi G Ramesh's residence and sought permission to move an urgent motion.

Opposition leaders including Rahul Gandhi, Sitaram Yechury and D Raja, besides actor Rajinikanth backed the DMK's demand and urged the government to allot the leader a space on the famed sands.

The acting chief justice directed them to serve notice on the advocate general, saying he would hear the case at 10.30 pm at his residence. DMK working president M K Stalin had written to chief minister K Palaniswami seeking space inside the mausoleum complex of Karunanidhi's mentor C N Annadurai at the Marina.

The development took place even as  Karunanidhi's body was being moved to his family residence at Gopalapuram in Chennai.