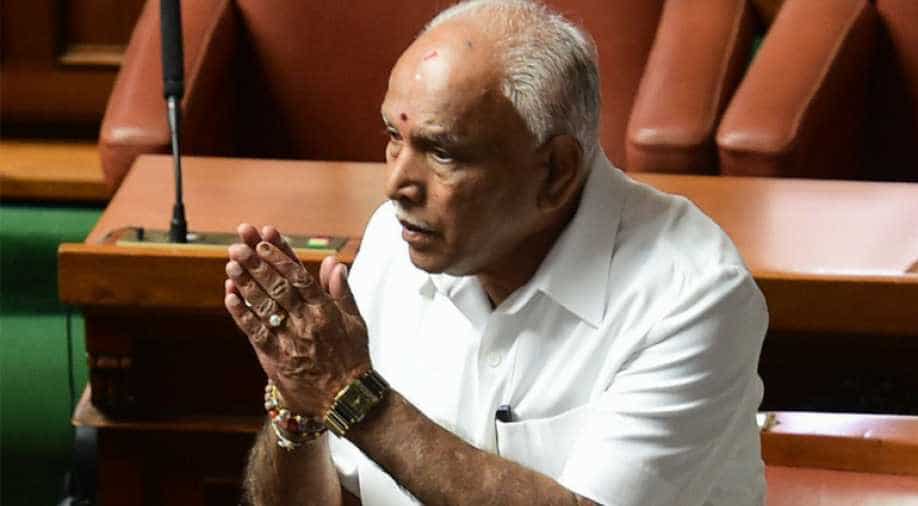 In an emotional speech before stepping down as Chief Minister, B S Yeddyurappa today accused the Congress-JDS combine of forming an "opportunistic" alliance and said the popular mandate had been subverted due to their "conspiracy".

Yeddyurappa admitted he had expected opposition MLAs to cross-vote. To realise the public mandate and with development in mind, he said he asked members for a vote of conscience.

"It is true that I had spoken to a few of them (in the opposition)," Yeddyurappa said.

Stating that BJP believes in the democratic system, he said he had expected MLAs "on the other side" would understand that in today's political situation, things would change if his government came to power, when the Narendra Modi government is at the Centre. "Some people had agreed to cooperate," he said.

Also read: HD Kumaraswamy to take oath as Karnataka Chief Minister on May 23

He however added, "Who am I to question in politics? Expectation is different, there may be differences." Assuring people that "till his last breath", he will travel across Karnataka, he said he would explain the developments and ensure that the party wins all 28 seats of the state in the Lok Sabha elections next year and "give it as a gift to Prime Minister Narendra Modi".

Yeddyurappa, who announced his decision without facing the trust vote after not being able to rustle up the numbers, charged that the JDS-combine had kept the MLAs in captivity.

"You kept MLAs in captivity. The situation of those MLAs was so pitiable that they could not speak to their families on phone," he said in his speech after moving the motion of confidence to face the trial of strength.Taunting Congress and JDS, a glum-looking Yeddyurappa said, "Today the family members may be a bit happy as they are seeing them (MLAs)."

Governor Vajubhai Vala had given a 15-day window to Yeddyurappa, but it was truncated by the Supreme Court, which ordered that the floor test be held within a day itself. Yeddyurappa said the Congress did not get people's mandate, nor did the JDS.

He said those who traded charges and counter-charges, after being defeated at the hustings, were indulging in "opportunistic politics" against the people's mandate and had come to an understanding.

The Governor had invited the BJP as it had emerged as the single largest party, Yeddyurappa said.

"I feel today it is like agni pareekshe (trial by fire).

It is not the first time. All my life it has been agni pareekshe," he said, tracing the journey of the BJP when it had only two members and the present state it had reached.

To Kumaraswamy, he said "I have come through struggle. Someone said if you don't give me power I will end my life...I won't say that. Whether I get power or not, I will give my life for the people."

Yeddyurappa said he is indebted to people who have shown him love. "Due to our Congress' friends conspiracy, the public mandate and democratic system has been subverted," he said.

"In the wake of this, I'm not pressing this motion of confidence, and I will resign. I will go to people against this politics of anti democracy and seek justice. I will directly go to the Governor and submit my resignation as Chief Minister," he said.