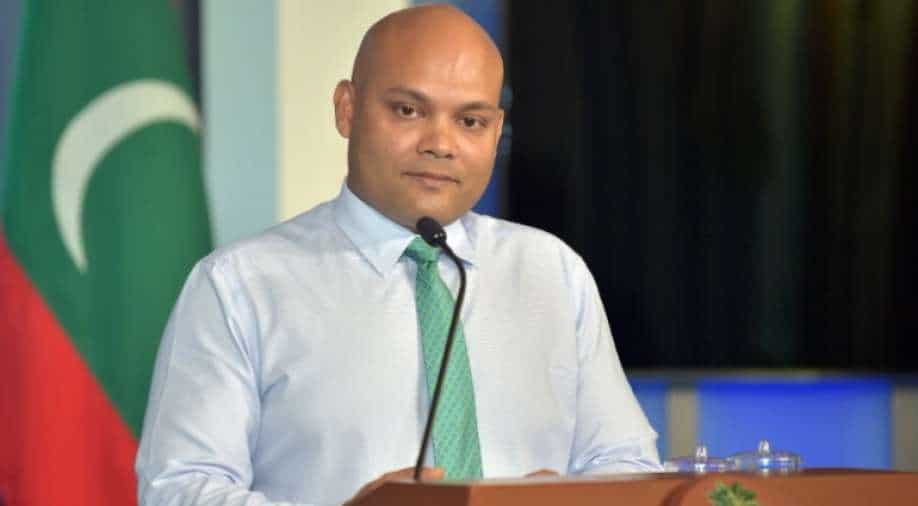 WION Exclusive: The spokesperson also talked about ties with India, saying, 'As our largest neighbour and one of our oldest development partners, India features prominently in our regional engagements'

The Maldives is looking for a cohesive strategy for its Indo-Pacific engagement such that it can "benefit our own development priorities", the spokesperson for the Maldives President has said. Speaking exclusively to our Principal Diplomatic Correspondent Sidhant Sibal from Male, spokesperson Ibrahim Hood said, "We especially share our partners’ vision of keeping a Free and Open Indo-Pacific so that legitimate commercial activity across this vast expanse is unhindered and brings prosperity to all of its communities."

The spokesperson also talked about ties with India, saying, "As our largest neighbour and one of our oldest development partners, India features prominently in our regional engagements."

Ties between the 2 countries have grown under the present President Solih administration with increased high-level visits. India's foreign secretary Harsh Shringla had visited the country in early November. New Delhi is involved in a number of infra projects in the country and has extended support amidst the COVID-19 pandemic.

WION: How does the Maldives see its partnership with India in 2020?
Ibrahim Hood: The Maldives continues to cherish the excellent partnership we have with India. Since President Ibrahim Mohamed Solih was sworn into office, his administration has made a determined effort to improve the Maldives’ relationships the world over and with its immediate neighbours in particular. As our largest neighbour and one of our oldest development partners, India features prominently in our regional engagements. During the first two years of this Administration’s time in office the Maldives and India have exchanged several high-level visits including State visits by President Solih and Prime Minister Narendra Modi. Over the course of these engagements, we have expanded cooperation on all spheres, from fisheries and trade to tourism, healthcare and regional defence. Our ties with India cannot be limited to governmental interactions alone. Large communities of Maldivians call India a second home. In turn, the Maldives hosts a significant population of Indian expatriates. The cultural influence that India exerts on the Maldives through mediums such as Bollywood is immense, and the civilizational and cultural ties that bind our two countries together run deep. Complemented by our two governments’ determination to maintain friendly relations, these factors will keep the Maldives-India relationship strong and enduring.

WION: How has India helped the Maldives during the Covid-19 pandemic?
Ibrahim Hood: India’s timely and generous assistance throughout the pandemic helped enhance the Maldives’ healthcare capacity, reduced the strain on our economy and increased the efficiency of our response to the disease. Through operation Sanjeevani they airlifted over six tons of essential medicines to the Maldives and sent a medical team to assist us with our health response. Prime Minister Modi’s early initiative to establish a South Asian Covid-19 fund to be used as a common resource to help the region combat the pandemic was also of great help to us. In addition to direct medical assistance, India has also provided us with support to help allay the indirect challenges of the disease, especially economic ones. They have provided us with budgetary support and set up lines of credit which have helped us shore up our foreign currency reserves. We cannot thank them enough for all that they have done for us.

WION: How are both countries working together on regional security in the Indian Ocean?
Ibrahim Hood: The Maldives has always maintained the firm belief that the Indian ocean should be a zone of peace. The best way to do this is through increased cooperation amongst all stakeholders. All Indian Ocean States have a common interest in addressing the current drivers of regional insecurity from terrorism, to narcotics and human smuggling, to Illegal, Unregulated and Unreported (IUU) fishing, which diminishes our food security, to natural disasters such as the Indian Ocean Tsunami of 2004, which seriously endanger our populations, economies and physical infrastructure. These issues cannot be resolved unilaterally, and all South Asian States must cooperate on such things as intelligence sharing, monitoring the Indian ocean’s vast EEZs and ensuring the safety and security of its Sea Lanes of Communication. That is why the Maldives has joined regional organizations such as the Indian Ocean Rim Association (IORA) which strive to resolve these issues collectively.

WION: How do India and Maldives plan to work on issues such as connectivity?
Ibrahim Hood: The South Asian region is one of the least integrated regions in the world. This is costing our populations. For instance, intraregional trade within South Asia is estimated to be 5% of our collective GDP compared to 25% for ASEAN countries. Reducing trade barriers between our countries could potentially raise billions of dollars for our economies. Furthermore, as I have alluded to in my answer to the previous question, South Asia faces a set of common challenges which can only be overcome by the region’s countries working together. The governments of both India and Maldives recognize these facts, which is why we have strengthened our bilateral partnerships with each other and with the rest of South Asia, and why we committed to strengthening the capacity of important regional bodies such as SAARC and IORA.

WION: How do you see the Indo-Pacific concept? Do you support this concept?
Ibrahim Hood: As Japan’s former Prime Minister Abe Shinzo famously expressed during his remarks while addressing India’s Lok Sabha and referring to the increasing linkages between the Indian and the Pacific Oceans, there is now a salient ‘confluence between the two seas’. The Indian and Pacific region together are now at the heart of international relations; together, they comprise a region that stretches from the West coast of the United States to the Western shores of India. Contributing to 2/3rds of the global GDP growth, home to several major world powers, six of which possess nuclear weapons and containing over half of the world’s population, the region’s centrality to global geopolitics is unquestionable. That the Indian and Pacific oceans should be recognized as a single political construct is increasingly recognized by the world’s great powers. For instance, that is why the United States has combined their previously separate Indian Ocean and Pacific Ocean fleets into a single Indo-Pacific fleet. As an island nation centrally located in the Indian Ocean, sitting astride several important sea lines of communication (SLOCS) linking the Indian and Pacific Oceans, the Maldives must have a cohesive strategy regarding our Indo Pacific engagement, in terms of making use of the increased geopolitical attention given to this region, and making use of that to benefit our own development priorities. We especially share our partners’ vision of keeping a Free and Open Indo-Pacific so that legitimate commercial activity across this vast expanse is unhindered and brings prosperity to all of its communities.