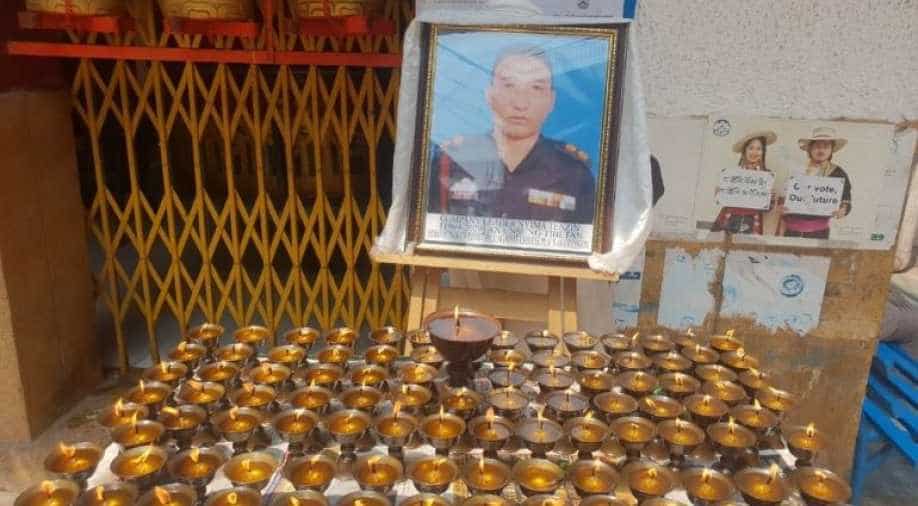 India's Special frontier force's (SFF) soldier Nyima Tenzin was cremated with full public honours in Ladakh on Monday. He was a member of the Tibetan refugee community which came out in full force in Ladakh to pay tributes to him.

According to Army sources he died in a landmine blast last weekend that saw the Indian army thwarting attempts by Chinese to occupy southern bank of Pangong lake.

With body wrapped in Indian and Tibetan flags, Tenzin was cremated as the atmosphere reverberated with slogans like "Bharat Mata Ki Jai", "We salute Indian army". The Indian National anthem was also sung along with and the anthem of Tibetan Government in Exile which is considered as the Tibetan National Anthem written in 1950.

Ruling BJP party's National General Secretary was also present. He tweeted saying, he is was "a Tibetan who laid down his life protecting our borders in Ladakh" but later deleted it.

His presence at the funeral can be read as New Delhi's departure from its traditional stand. India has traditionally recognised the Tibetan autonomous region as a part of China. As the world rethinks its ties with China, India is already hinting at a blueprint.

The development comes amidst heightened India China tensions at the line of actual control in Eastern Ladakh. The two Asian giants are locked in a bitter row in over 4 months after what India describes as "unilateral" action by China to hindered the "normal patrolling patterns."

The Tibetan community in Delhi also paid homage at Majnu Ka Tila monastery. The area has a sizeable Tibetan community. On his picture was written, "hero of India's resistance against Chinese PLA's aggression" and "the unsung Tibetan". Tenzin was part of the Vikas regiment of the SFF.

SFF has been so far hidden from any attention. Created in 1962, it is made up of Tibetan refugees, whose forefathers left Tibet after Chinese occupations.

While Indian govt hasn't reacted publicly over SFF's existence, this the first time the Tibetan community has publicly come out on it. The development is expected to rile China.

Lasted week when asked about ethnic Tibetans being part of Indian troops, the Chinese foreign ministry spokesperson Hua Chunying said, "I am also wondering what is the connection between so-called "Tibetans in exile" and the Indian border troops. I hope you can do some in-depth investigation. It will be great if you can share with us any further information and progress in this regard."

She also blamed US saying, "role the US has played in this process. China's position is very clear. We firmly oppose any country providing convenience in any form for the "Tibet independence" forces' separatist activities."