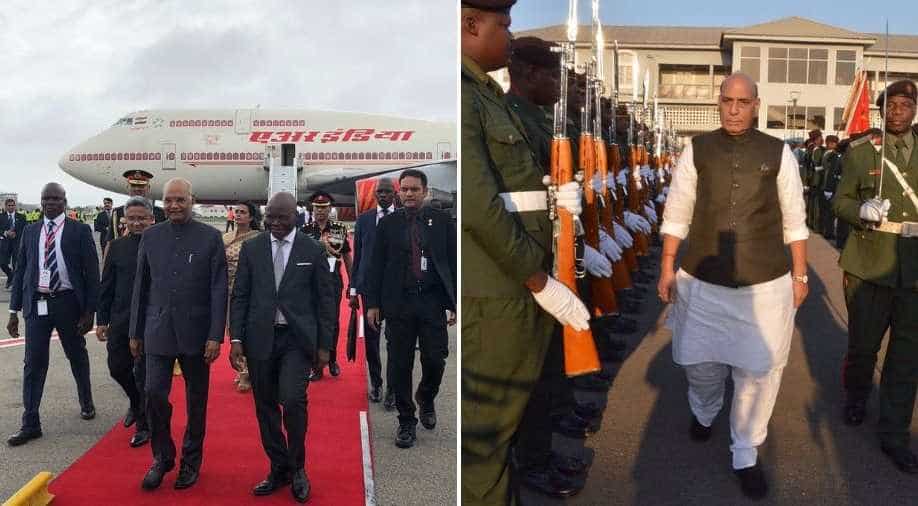 Benin is a signatory of India-led International Solar Alliance and New Delhi is the largest trading partner of the country with trade growing at 100 million dollars in last one year.

Upping focus on increasing ties with Africa, President Ram Nath Kovind is on a visit to West African country Benin while Defence Minister Rajnath Singh is in Mozambique.

President Ram Nath Kovind reached Porto-Novo on Sunday and will address the national assembly there on Monday. Benin is a signatory of India-led International Solar Alliance and New Delhi is the largest trading partner of the country with trade growing at 100 million dollars in last one year.

President Kovind is currently on a 3-nation tour of West African countries -Benin, Gambia and Guinea from July 28 to August 3. He will be received by President of Gambia in Banjul. President Kovind will address the national assembly of Gambia as well. In all 3 countries, he will be meeting with the Indian community members.

"Engagement with Africa is one of the priorities of foreign policy and we are looking at countries where high-level visits have not taken place", Vijay Thakur Singh, Secretary (East) in the Ministry of External Affairs said.

This is the 10th foreign visit by the president since taking charge. After this visit, he will be travelling to 23 countries.

He tweeted," India is willing to forge a strong bilateral relationship with Mozambique by increasing regular engagement and cooperation in multiple spheres."

PM Modi had visited the country in July 2016. There have been 29 visits at the level of President, Vice President and Prime Minister in last 5 years. Next year the India-Africa forum summit will take place in Africa.