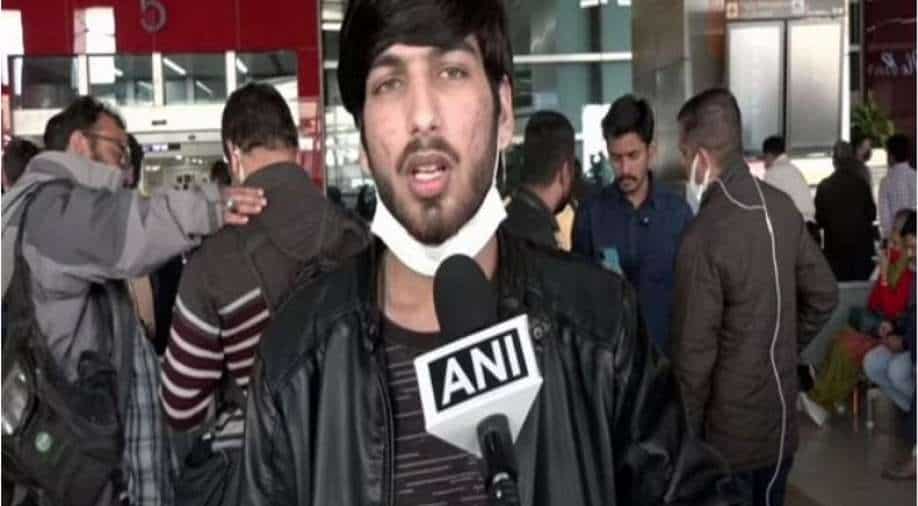 Yadav, who is studying at a Kyiv institute, described his trauma after arriving at the Delhi international airport.

An Indian student stranded in Ukraine due to Russian military actions became a good Samaritan when he assisted a Pakistani student in Kyiv in reaching the Romanian border, where she was evacuated to her motherland.

Ankit Yadav, who recently returned from the conflict-torn Ukraine, told ANI that he assisted her in getting to the Pakistani consulate, from where she was flown back to her hometown.

"I met her at a bunker on the evening of February 24. I was the only Indian and she was the only Pakistani in that bunker which was filled with Ukrainians. Due to the language barrier, we could not speak to anybody else. With rising tensions in Ukraine, we decided to make a plan to flee the city. We had planned to leave on February 26, but a curfew was imposed and we failed in our first attempt, "Yadav said.

Yadav, who is studying at a Kyiv institute, described his trauma after arriving at the Delhi international airport, saying they were not allowed to leave the bunker due to continuous bombardment and Russian military actions.

He claimed that procuring food was a problem because Ukrainians ate largely non-vegetarian food and supplies were running out.

"When I requested, they allowed me to leave the bunker on February 27 to get a nasal spray. That is when I fled to my hostel with a curfew in place, cooked food for both of us and returned," Yadav said. "With not enough food, on the night of February 27 we only consumed rice provided to us by the Ukrainians and slept," he added.

On February 28 when curfew lifted, Yadav said they managed to flee the bunker and find a store to replenish their supplies and then began planning to leave the city.

"About that time she received a call from the Pakistani Embassy. When she told them that she was still in Kyiv and did not have any other person from her country with her, the officials of the embassy requested that I accompany her to the border for safety concerns," he said.

After trudging for about 5 km to the railway station, Yadav said that they met some more students but could not board the overcrowded train because of which they missed first three trains.

"Luckily, we got the next train but there no empty seats left and we had to sit on the floor. Sometime later we heard a blast in our train and eventually, the train began to move slowly and took us to our destination," Yadav said.

The Pakistani girl, he said, then contacted her embassy, which arranged a taxi and arranged a bus with other Pakistani nationals to evacuate them to the Romania border.

Meanwhile, earlier in the day, Minister of State for External Affairs V Muraleedharan informed that over 11,000 Indians have been evacuated from Ukraine so far.

The government has deployed ‘special envoys’ to four neighbouring countries bordering Ukraine to coordinate and oversee the evacuation process of Indian nationals.