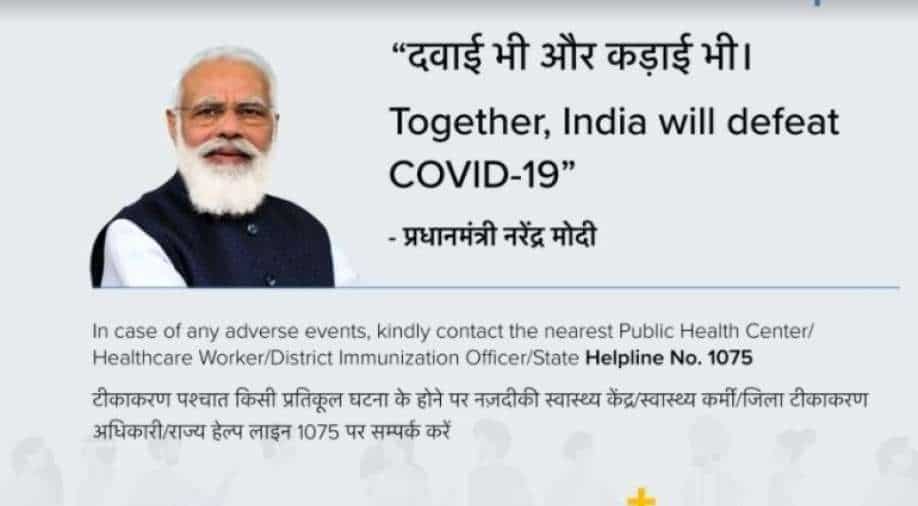 The petitioner requested a certificate that did not include the prime minister's photograph.

The Kerala High Court issued a notice to the Centre and the state government on October 8, 2021, in response to a suit filed by Peter M demanding Covid-19 certificates devoid of Prime Minister Narendra Modi's photograph.

Peter M stated that the vaccination certificates that are now being distributed violate a citizen's basic rights.

The petitioner requested a certificate that did not include the prime minister's photograph.

Peter M, 62, is a member of India's main opposition Congress party and a right to information campaigner.

Both governments have two weeks to submit their positions.

Peter M is particularly irritated since he had to pay for his own vaccination at a private hospital because "there was a huge line for appointments at government facilities" that provided free vaccinations.

"I spent Rs 750 for each jab, so why should PM Modi's picture be on my certificate?" he questions.

Peter M, 62, is a member of India's main opposition Congress party and a right to information campaigner.

Political opponents have also criticised the prime minister's photo on the vaccination certificate.

Several opposition-ruled states have even replaced his photograph with those of their own chief ministers.

Previously, the Union government justified its choice to include the photograph in the certificate, claiming that the image of the Prime Minister, together with his remarks, helps to raise general awareness and Covid-appropriate behaviour.

When an issue was raised in the upper chamber two months ago, Minister of State for Health BP Pawar stated the Prime Minister's portrait was perfect for raising awareness.