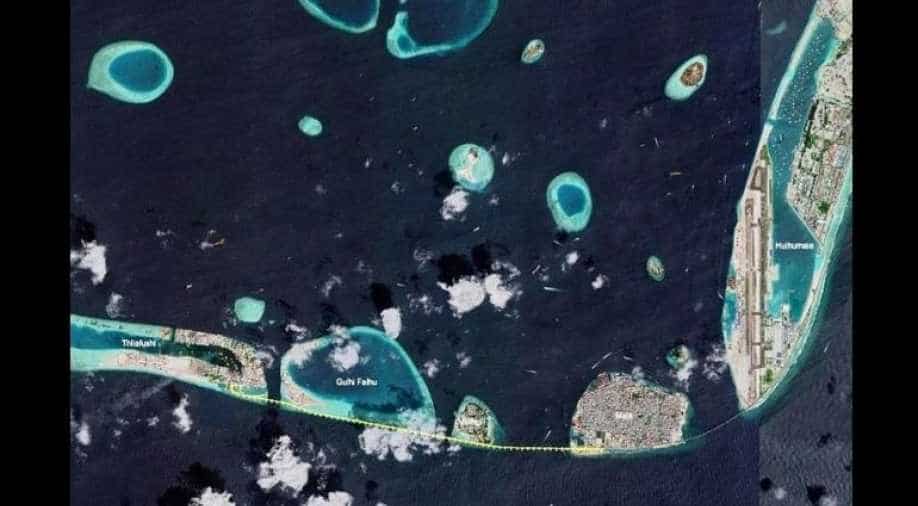 The project was a key election promise of the ruling MDP Maldivian Democratic Party and President Ibrahim Mohamed Solih had personally sought India’s assistance for the project.

India will provide funding of $500 million for the project which that will increase connectivity between the country. The $500 financial package consisting of a grant of $ 100 million and a new Line of Credit (LOC) of USD 400 million.

The project was a key election promise of the ruling MDP Maldivian Democratic Party and President Ibrahim Mohamed Solih had personally sought India’s assistance for the project.

Villingili is near capital Male, Thilafushi is an artificial island created as a municipal landfill and a new industrial zone and Gulhifalhu will be furthered developed into industrial location.

As of now 1.39 km Maldives-China Friendship bridge connecting Malé with Hulhule and Hulhumale to its east has been the most visible infra-project of the country but the new mega Indian financed projected will dwarf it once completed.

In Gulhifahu which is part of Greater Malé Connectivity Project, a port is being developed under India's LoC worth $800 million.

Under Indian line of credit several projects are already in construction including water supply and sewerage systems on 34 Island, Hanimadhoo International Airport Redevelopment, construction of international cricket stadium in Hulhumale, ccancer hospital in Hulhumale spaning the country geographical from the northernmost to the southernmost islands of Maldives.

Other than internal connectivity, plans to connect to India-Maldives are also underway. The cargo ferry service between Cochin to Kulhudhufushi-Malé will be operationalised within the next few months. Ministry of external affairs in its release said,"direct cargo ferry service will commence shortly."

Kulhudhuffushi known as "Heart of the North" is the capital of Haa Dhaalu Atoll and near to the Indian state of Kerala. The ferry service was announced last year during PM Modi's visit to the country.

During COVID-19 pandemic, India had made sure supply lines for essential food and construction materials continue to the Maldives. It also gifted 580 tons of essential food items through Mission SAGAR.