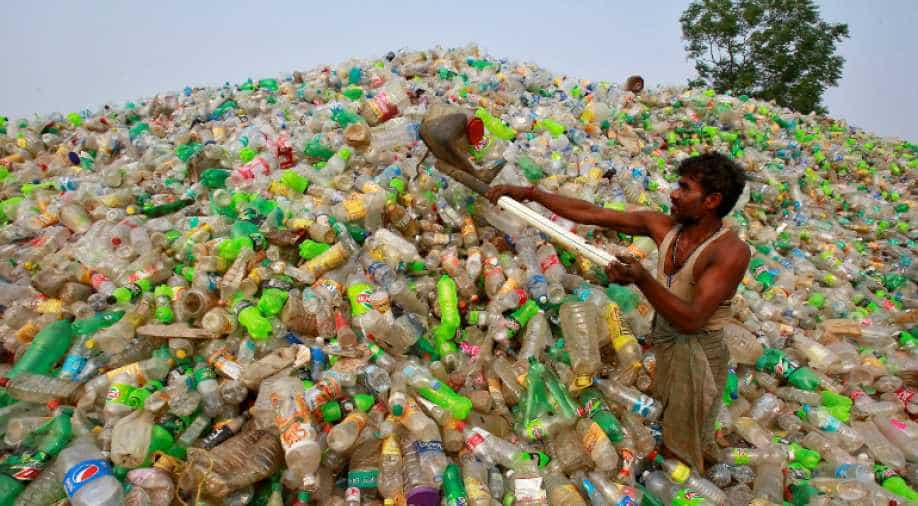 A man makes a heap of plastic bottles at a junkyard in Chandigarh Photograph:( Reuters )

Prime Minister Narendra Modi, who is leading efforts to scrap such plastics by 2022, is set to launch the campaign with a ban on as many as six items on October 2, the birth anniversary of independence leader Mahatma Gandhi, two officials said

India is set to impose a nationwide ban on plastic bags, cups and straws on October 2, officials said, in its most sweeping measure yet to stamp out single-use plastics from cities and villages that rank among the world's most polluted.

Prime Minister Narendra Modi, who is leading efforts to scrap such plastics by 2022, is set to launch the campaign with a ban on as many as six items on October 2, the birth anniversary of independence leader Mahatma Gandhi, two officials said.

These include plastic bags, cups, plates, small bottles, straws and certain types of sachets, said the officials, who asked not to be identified, in line with government policy.

"The ban will be comprehensive and will cover manufacturing, usage and import of such items," one official said.

India's environment and housing ministries, the two main ministries leading the drive, did not respond to emails from Reuters to seek comment.

In an Independence Day speech on August 15, Modi had urged people and government agencies to "take the first big step" on October 2 towards freeing India of single-use plastic.

Concerns are growing worldwide about plastic pollution, with a particular focus on the oceans, where nearly 50 per cent of single-use plastic products end up, killing marine life and entering the human food chain, studies show.

The European Union plans to ban single-use plastic items such as straws, forks, knives and cotton buds by 2021.

India lacks an organised system for management of plastic waste, leading to widespread littering across its towns and cities.

The ban on the first six items of single-use plastics will clip 5 per cent to 10 per cent from India's annual consumption of about 14 million tonnes of plastic, the first official said.

Penalties for violations of the ban will probably take effect after an initial six-month period to allow people time to adopt alternatives, officials said.

The federal government also plans tougher environmental standards for plastic products and will insist on the use of recyclable plastic only, the first source said.

It will also ask e-commerce companies to cut back on plastic packaging that makes up nearly 40 per cent of India's annual plastic consumption, officials say.

Cheap smartphones and a surge in the number of internet users have boosted orders for e-commerce companies, such as Amazon.com Inc and Walmart Inc's Flipkart, which wrap their wares - from books and medicines to cigarettes and cosmetics - in plastic, pushing up consumption.