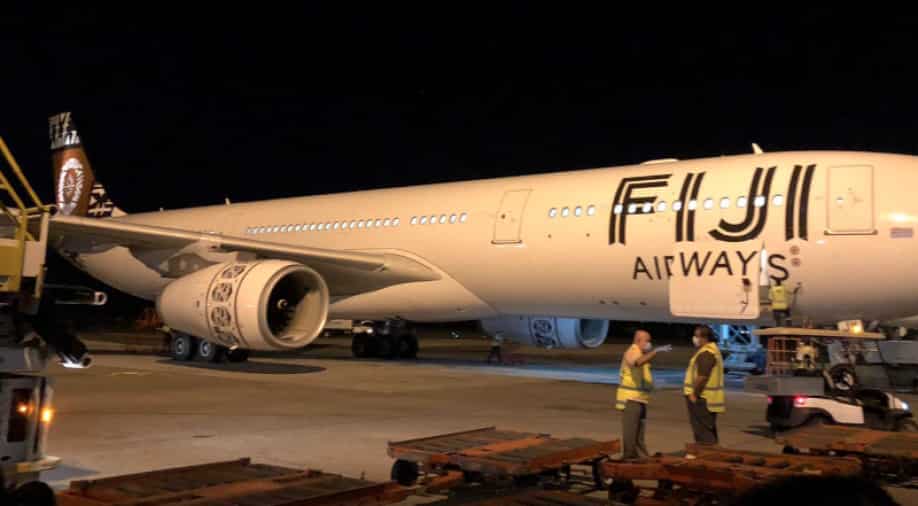 Fiji got a consignment of 100,000 doses of India-made vaccines (Image courtesy: Ministry of External Affairs) Photograph:( Others )

India's coronavirus vaccine outreach, or Vaccine Maitri, is continuing with full gusto, with the latest entrant being Fiji, which got a consignment of 100,000 doses.

Fiji's prime minister thanked Indian Prime minister Narendra Modi, tweeting, "Vinaka [thank you] to my friend, @narendramodi , for helping us take this giant step towards a post-pandemic future for Fiji and for the world."

#VaccineMaitri has arrived to Fiji with 100k doses of life-saving COVID-19 vaccines.

Vinaka to my friend, @narendramodi, for helping us take this giant step towards a post-pandemic future for Fiji and for the world. pic.twitter.com/xlWdm04Nvs

"In a bleak year for multilateralism, you’ve helped put a welcome pause on the pandemic politics that’s kept valuable vaccines in the world’s largest & richest countries," he added.

India has sent vaccines to other countries in the Pacific, including to Solomon Islands. India has also dispatched the doses to the Caribbean.

The Indian high commission said in a release: "India and Fiji share longstanding partnership based on mutual respect, cooperation and cultural ties. Fiji is an important partner for realising the Indo- Pacific vision that envisages a free, open and inclusive region in a common pursuit of progress and prosperity."

India began its Vaccine Maitri drive in January, with the first tranche of Indian vaccines being sent to the Maldives and Bhutan, followed by other countries in the neighbourhood. India's vaccine outreach to the world started within four days of it starting its mega domestic vaccination programme on 16th January.

Speaking at an event on Tuesday, Foreign Secretary Harsh Shringla said, "Since the launch of Vaccine Maitri, we have supplied 64 million doses of vaccines to 82 countries. This includes supplies under a grant, commercial contracts and the COVAX facility [the global vaccine access initiative spearheaded by World Health Organization]."

India's vaccine initiative is expected to get a booster shot, with Quad countries - India, US, Australia, Japan- agreeing after the first leadership summit in March that India's vaccine manufacturing capacity will be increased to produce more doses for the Indo-Pacific region.