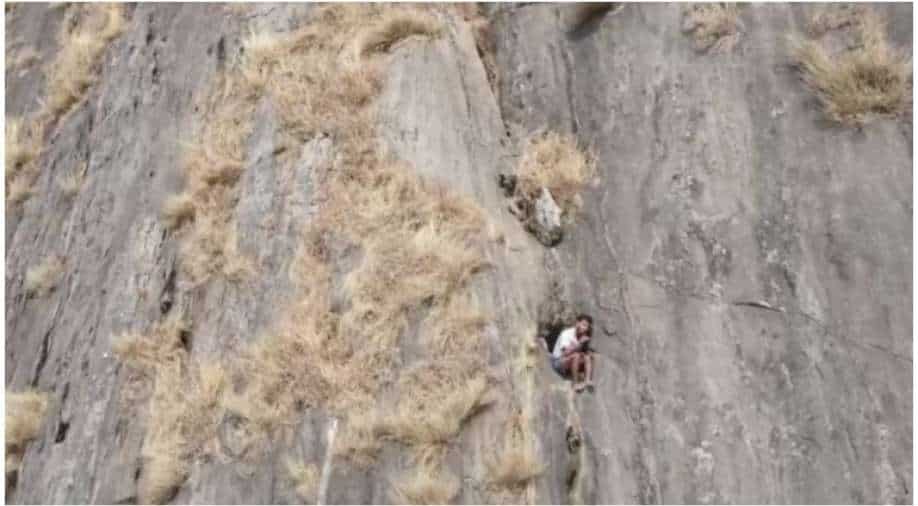 (Image: Siddharth MP) The trekker can be seen stuck in the hillside crevice Photograph:( WION )

On Tuesday afternoon, a Coast Guard helicopter flew over the hill and conducted an aerial recce. Another rescue mission is planned for Wednesday morning

Two Indian Army teams with mountaineering experts have been mobilised in Palakkad in the southern Indian state of Kerala to attempt a complex rescue operation at a steep hillside crevice. Babu, a young trekker has been stuck in the narrow crevice for over 30 hours, at the Koormbachi hillock. He slipped while descending and his friends couldn’t help him to safety.

The trekker has been braving bad weather without food and water for 30 hours now.

Efforts on by #Indian Defence forces to #RESCUE trekker who has been stuck at a hillside crevice in #malampuzha #palakkad #kerala for over 30hrs@IndiaCoastGuard helo conducted recce, but terrain & winds proved challenging & had to abort

On Monday, Babu and three of his friends went on a trek near the Malampuzha area in Palakkad and scaled the Kurumbachi hillock. His friends alerted authorities. Fire brigade and Police were unable to rescue him. Videos from the spot show the trapped youngster signalling for help and asking for food and water. Efforts from National Disaster Response Force (NDRF) personnel were not enough to rescue him.

On Tuesday afternoon, a Coast Guard helicopter flew over the hill and conducted an aerial recce. Another rescue mission is planned for Wednesday morning.

Might look like a small hillock on drone shots... But it is quite a huge place.. indeed a challenge for rescue ops..

Of the two army teams, the team from Wellington, Tamil Nadu arrived by late Tuesday. The team from Bengaluru is expected to reach by Wednesday morning. Garuda Aerospace, a private drone company based in Chennai has also mobilized two of their customized drones that will help carry payload (food and water) to the individual and also aid in carrying a rope or harness that would eventually help in his rescue.