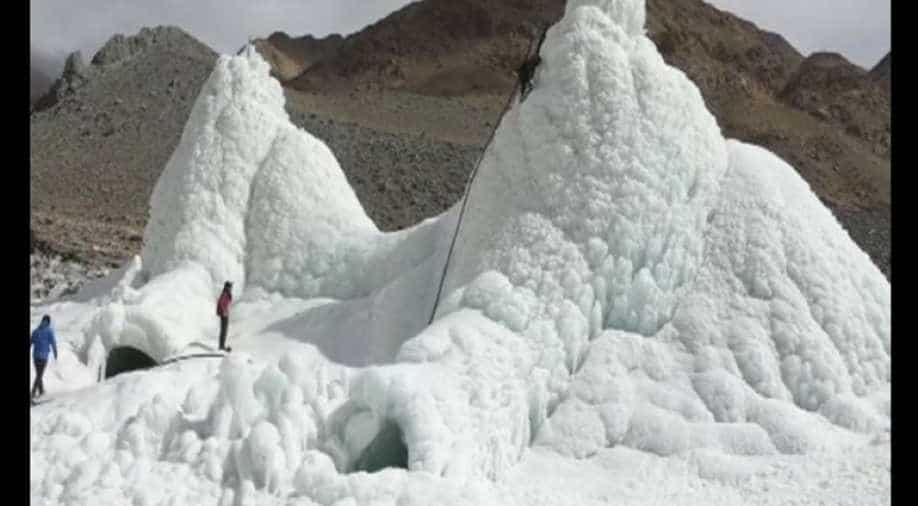 A natural glacier formed out of winter snowfall. Photograph:( ANI )

An innovative manmade artificial ice stupa has been created in Leh to conserve winter waste water to address the water scarcity during spring.

The stupa has become a centre of attraction for thousands of tourist including locals.

The natural glacier formed out of winter snowfall on higher reaches of mountain serves as main source of water supply in Ladakh region for farmers.

As the global warming resulted in shrinking of natural glaciers the farmers in Ladakh are facing acute shortage of water for irrigation especially during the spring season.

The winter waste water is stored in the shape of ice stupas which melts slowly during spring time thus providing an alternate source of water supply when natural glaciers don't melt properly at a point of time in spring.

The excess water from artificial ice stupa is stored in a tank constructed below it.

One of volunteer Sonam Dorjay (24), from Wakha village working on ice stupa, said that he had been working on it for the past four years and it serves as an alternate source of water in spring time.

He added that concept of Ice Stupa is based on the idea of Iceman of Ladakh Chhewang Norphel who made artificial glaciers in Nang village.

Sonam added that large number of visitors including tourist visits the Ice Stupa and the number increases on holidays and weekends.

Another volunteer Thomas Clark from USA, who had been working on this ice stupa for the past four years said that this year they built the ice stupa directly in the stream with the purpose of water conservation.