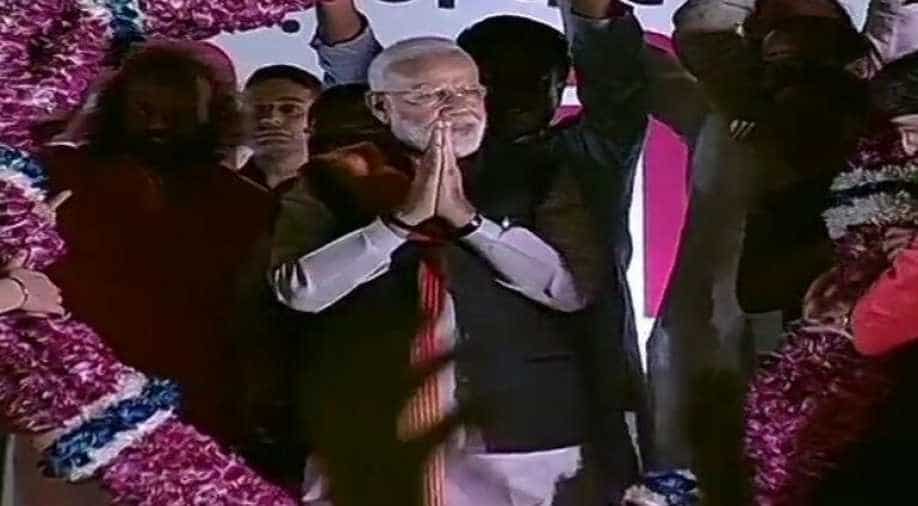 Modi arrives in New Delhi from New York City where he was felicitated with garlands. Photograph:( ANI )

Prime Minister Narendra Modi arrived in Delhi on Saturday after a week-long visit at the United Nations General Assembly (UNGA) in New York where he discussed bilateral issues with prominent leaders of the world and spoke extensively about curbing terrorism and decelerating climate change.

Before he showed up, people turned up in large numbers outside Palam Technical Airport to welcome the Indian prime minister.

"We are here to receive to Modiji. We are very excited to see him," Surya Kumar, a BJP worker told ANI.

The PM arrived in an Air India flight at 8pm (IST) and deboarded thirty minutes later.

#WATCH Prime Minister Narendra Modi arrives in Delhi, after concluding his visit to the United States of America. pic.twitter.com/mjqF4jspn3

In the backdrop of the excitement surrounding his return, Delhi Police had put into place elaborate security arrangements for PM Modi's arrival.

"Nine companies of para-military forces have been deployed in the national capital. Anti-terror measures have also been taken. The security arrangements will be in order in coordination with all agencies. Snipers will be deployed on rooftops," MS Randhawa, Deputy Commissioner of Police, Central Delhi said.