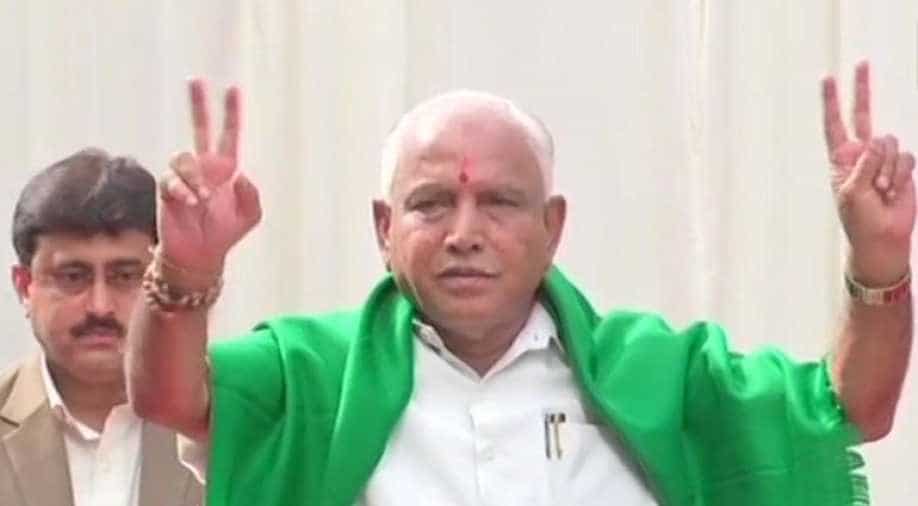 Yeddyurappa also claimed that Congress strongman Mallikarjun Kharge is in a difficult situation in the Hyderabad-Karnataka region after his supporters deserted him to join BJP.

The BJP is optimistic about performing well in states where the party did not have much presence earlier which will help push its overall tally to 300 in the upcoming Lok Sabha polls, the party's Karnataka unit president BS Yeddyurappa said here.

In Karnataka too, the BJP is "doing well" in Hyderabad-Karnataka region and "already has good presence" in Mumbai-Karnataka and Central Karnataka, the former chief minister said, and claimed if the party wins 20 to 22 seats in the state, it would lead to collapse of the Congress-JD(S) coalition government due to infighting.

In the 2014 Lok Sabha election, the BJP won 17 seats out of 28, Congress bagged nine seats while the JD (S) got two seats. The Congress and the JD(S) are fighting in alliance this time, with the two parties agreeing to contest 20 and eight seats respectively.

"There is a positive atmosphere across the country. Narendra Modi's wave has only increased manifold compared to the last Lok Sabha elections. We are expecting to win seats from new territories like West Bengal, Odisha and other North-Eastern states. This would push BJP's overall tally to 300 Lok Sabha seats," he told PTI in an interview here.

The party is also expecting to improve its tally in Tamil Nadu, Telangana and Andhra Pradesh, Yeddyurappa said, and expressed confidence that the party would open an account in Kerala.

Though the BJP lost Madhya Pradesh and Rajasthan assembly elections, the party is going to repeat its 2014 performance in Lok Sabha polls, he asserted.

The BJP's prospects are good in Karnataka as it is expecting to do well in Tumkuru and Mysuru, and put up a fight in Ramnagara and Hassan, which are JD(S) bastions, he added.

Yeddyurappa also claimed that Congress strongman Mallikarjun Kharge is in a difficult situation in Hyderabad-Karnataka region after his supporters - Mallikayya Guttedar, Umesh Jadhav, Baburao Chinchunsur and Malaka Reddy - deserted him to join BJP.

"I am very optimistic of the BJP doing well in Hyderabad-Karnataka region, especially Kalaburgi. I am sure the entry of Guttedar, Jadhav, Chinchunsur and Reddy, can turn the tables on Kharge. The Congress leader is in a lurch by missing these leaders who made possible his victories," he said.

"As it is, the BJP has good presence in Mumbai-Karnataka and Central Karnataka, historically," he said.

Yeddyurappa said they were expecting a positive impact from Prime Minister Narendra Modi's rallies in Karnataka, "which have always worked in favour of the party".

"We have requested Modiji to address four rallies in Karnataka. The dates and places of rallies will be decided later," he said.

Asked about KPCC President Dinesh Gundurao's offer to Rahul Gandhi to contest from Karnataka, Yeddyurappa said the Congress is uncertain that Gandhi can retain Amethi seat, which he managed to win with a 50 per cent reduction in margin in last Lok Sabha elections against Smriti Irani.

"According to me, Rahul Gandhi is losing his Amethi seat to Shrimati Smriti Irani, and hence the Congress is offering him to contest from Karnataka. It will not be easy for him to win from Karnataka also. I think Rahul Gandhi will not take any such risk," he said.

Recently, Gundurao had written a letter asking Gandhi to contest elections from Karnataka so that it would act as a nucleus for the Congress to strengthen its position in southern parts of India.

Asked if the party is concerned about D K Shivakumar campaigning against B Y Raghavendra from Shivvamogga after wresting Ballari seat from BJP in the last bypoll, Yeddyurappa said his son would win by one lakh votes margin as he has been working for the last six months without any break.

Yeddyurappa also said he is beginning his election tour in the next two to three days.

Replying to a query, he said if BJP wins 20 to 22 seats, infighting in the Congress and JDS would begin, which would result in the collapse of the coalition government.