From Moscow to London, Washington to Kabul: How global capitals went abuzz on Gandhi Jayanti 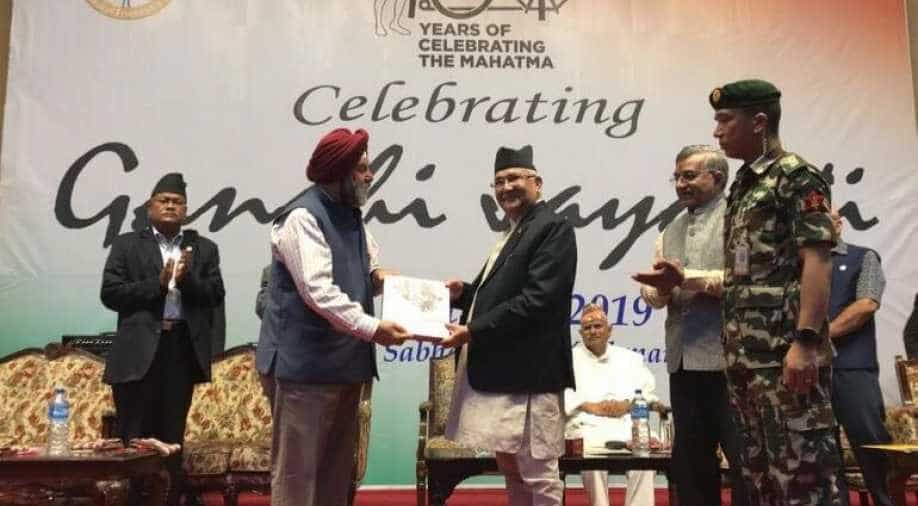 In South Africa, from where Gandhi began his journey as a mass leader program was organised at the constitution hill in Johannesburg.

In Russian Parliament - the state Duma an exhibition opened on the correspondence Mahatma Gandhi and famous Russian writer Leo Tolstoy. Deputy Chairman of State Duma Sergey Neverov along with Indian Envoy to Russia Bala Venkatesh Varma were present on the occasion.

Bala Venkatesh Varma thanked the State Duma for the opportunity to hold such an exhibition, saying ''Leo Tolstoy had a huge influence on Mahatma Gandhi, and their friendship became a symbol of friendship between the two great peoples of India and Russia.”

Mahatma Gandhi considered Leo Tolstoy as one of the most important people who influenced his life.

The iconic Burj Khalifa was lit up with a special LED projection for one hour to pay tribute to the father of the nation.

In the neighbourhood, celebrations happened in all capitals.

On the occasion of the 150th Birth Anniversary of Mahatma Gandhi, the Indian Embassy in Kabul organised a ''Swachhta Hi Seva'' campaign. Ambassador Vinay Kumar and Embassy Officials did Shramdaan to promote Gandhiji’s idea of cleanliness and environmental protection. Afghan Post in collaboration with the Indian Embassy issued a commemorative stamp. Afghan Minister for Communication and Information Technology Fahim Hashimy and Ambassador Kumar jointly unveiled the stamp in the Embassy.

In Sri Lanka, a special programme was held at the Presidential Secretariat in Colombo in which Sri Lanka President Maithripala Sirisena and High Commissioner Taranjit Singh Sandhu participated. Gandhi Bust made of bronze was unveiled at Temple Tree, the official residence of Prime Minister of Sri Lanka Ranil Wickremesinghe.

A “Padd Yatra” was organised in Yangon, Myanmar on Mahatma Gandhi Jayanti. The event was inaugurated by Indian Ambassador Saurabh Kumar and Yangon Cheif Minister U Phyo Min Thein.

Celebration of Mahatma Gandhi's birthday was organized at the Sari Mutiara University by the Indian mission in Indonesia. Indian envoy to Indonesia Pradeep Kumar Rawat inaugurated a bronze bust of Mahatma Gandhi which is placed prominently in the middle of this renowned University.

Central Asia also saw celebrations. Indian envoy to Kyrgyzstan Amitabh Dimri led the celebrations in capital Bishkek. A special programme was organised at the University of Central Asia in Bishkek. Indian mission in Kazakhstan organised an innovative way of remembering Gandhi by organising a painting competition in schools in which themes were Mahatma Gandhi, World Peace, India etc. Indian Ambassador to Kazakhstan Prabhat Kumar distributed prizes to winners of Painting Competition and led the celebrations.

Europe was abuzz with several activities.

London saw the celebration at Tavistock Place. Indian envoy Ruchi Ghanashyam along with Indian diaspora participated in full strength. Senior Deputy Speaker of UK House of Lords Lord McFall, Baroness Blackstone paid tribute at the statue of Mahatma Gandhi at parliament square in front of the British Parliament. The event was organised by Lord Meghnad Desai.

Indian Ambassador to Netherlands Venu Rajamony led the Gandhi March for Non-Violence through capital The Hague to highlight the importance of the message of non-violence. Around 300 school children and 150 adults took part in the march.

In Geneva, a ‘Gandhi Room’ has been set up in the Permanent Mission of India with an exhibit of photographs and documentaries depicting the life and journey of Mahatma Gandhi.

New Zealand was one of the first countries to celebrate Gandhi's birth anniversary. Indian envoy Muktesh Pardeshi led the celebration and said, "the presence of people from all walks of life at events held in Wellington underline the relevance of Gandhi Ji's philosophy and values".

In the United States, a major programme on Mahatma Gandhi will be celebrated in the historic Library of Congress with the speaker of the United States House of Representatives Nancy Pelosi and External Affairs Minister S Jaishankar taking part in the ceremony.

October 2 is the international day of non-violence and at the United Nations headquarters an event took place on "climate action: Gandhian way".

''His vision continues to resonate across the world, including through the work of the United Nations for mutual understanding, equality, sustainable development, the empowerment of young people, and the peaceful resolution of disputes”, Secretary-General António Guterres said in his message commemorating the day.

Last week at the united nations PM Modi inaugurated Gandhi Solar Park on the roof of the world body and delivered a lecture on the relevance of Mahatma Gandhi in the Contemporary World.

The prime minister said, "Mahatma Gandhi never held positions of power. Yet, he motivates people around the world. Millions of people, several nations drew strength from his ideals and attained freedom."