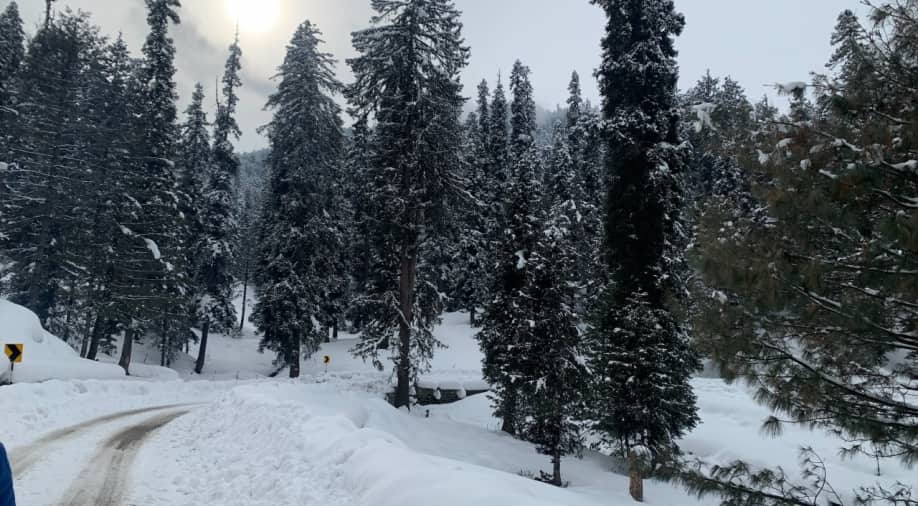 Several hill stations like Pahalgam and Gulmarg, tourist resorts in the north and south of the valley respectively, received the maximum snowfall

Kashmir witnessed a fresh spell of snowfall on Thursday, as rain and sleet dropped the minimum temperature across the valley

Several hill stations like Pahalgam and Gulmarg, tourist resorts in the north and south of the valley respectively, received the maximum snowfall.

The snowfall brought cheers to the skiers and athletes who have descended into the valley in record numbers.

From skiing to snowboarding to riding snow scooters, heavy crowds were witnessed among prominent resorts.

''I have been coming to Kashmir valley for the last five years. People here are respectful and humble. It's a real paradise on earth. I will come again. I came this year to take part in the sports activities. I have done snowboarding, rode snow scooters, sledge etc. Now I will come in the summers to see the greenery of this place. '' said Karuna, a tourist.

Kashmir Valley has traditionally attracted stories from all over the world for its picturesque destinations.

Hence, in order to gain more footfall, the government has been offering many discounts.

''This is the real paradise. The experience has been wonderful. The staff was very helpful, the hotels are nice, and the guides are also good. It snowed the whole night, and the view was mesmerising. I will remember this for the rest of my life. I was telling my daughter to come here too.,' said another tourist Vijay Sharma.

The weather officials have predicted that the weather will improve from tomorrow. They have also warned about the possibility of avalanches in the higher reaches. People have been advised to stay alert in higher reaches.

The tourist arrival has been record-breaking this winter in the Valley. The Jammu and Kashmir tourism department has started many sports adventure activities as well as added new locations for tourists to visit.