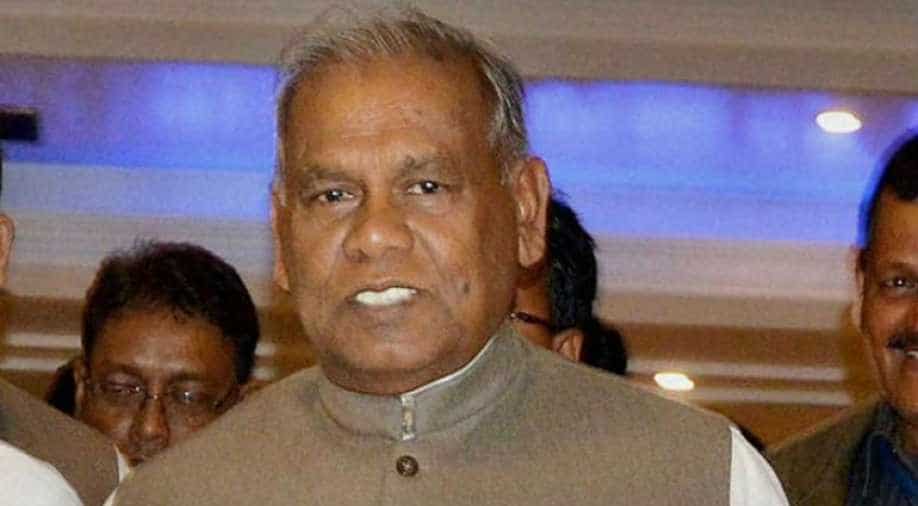 Former Bihar chief minister Jitan Ram Manjhi quit BJP-led National Democratic Alliance (NDA) on Wednesday and joined Rasthtriya Janata Dal-led Grand Alliance. Manjhi had on Sunday demanded a Rajya Sabha seat for his party, the the Hindustani Awam Morcha, and threatened that he would not support the BJP-led coalition if his demands are not met.

"The NDA must announce at least one Hindustani Awam Morcha (HAM) leader among its candidates for the six Rajya Sabha seats in Bihar. If that does not happen, our party workers will not campaign for candidates of the coalition in the by-polls," Manjhi had said.

"He has been an old friend to my parents, we welcome him," RJD's Tejashwi Yadav said.

Former CM Jitan Ram Manjhi quits NDA, joins #Bihar's 'grand-alliance', addressing the media along with Manjhi, RJD's Tejashwi Yadav said, 'he has been an old friend to my parents, we welcome him.' pic.twitter.com/EfghzUQ3WX

The Rajya Sabha election is slated for March 23.

The by-polls for Araria Lok Sabha seat and Jahanabad and Bhabhua Assembly seats are scheduled to be held on March 11.

Manjhi said, "For more than a year and a half, I and my party have been working tirelessly for strengthening the NDA in Bihar. But as the saying goes - even a mother does not feed her child until he or she cries and demands attention."

Manjhi had formed HAM after walking out of Nitish Kumar's Janata Dal (United) JD(U) in protest against the alleged pressure to step down as chief minister in 2015 and make way for the return of Nitish. He had fought the assembly polls held the same year as part of the NDA which lost to the grand alliance comprising JD(U), RJD and Congress.

Recently, the former chief minister had expressed the wish that his party be allowed to contest by-poll from Jahanabad Assembly seat, but withdrew the demand following alleged cold response from the BJP. The seat is now being contested by the JD(U), which had initially announced that it would not contest any of the three seats going for by-polls.